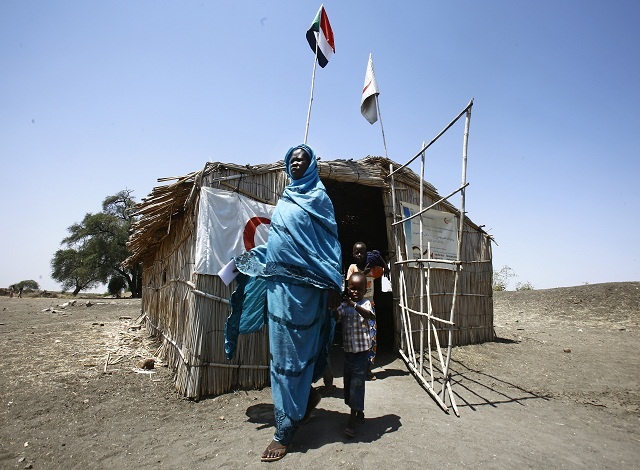 A South Sudanese refugee and her children leave a Red Crescent tent as they flee across the border in Sudan's White Nile state on February 28, 2017. (ASHRAF SHAZLY / AFP)

(AFP) -
Amnesty International on Tuesday renewed its call for a UN investigation into suspected chemical weapons attacks by Sudanese government forces in Darfur, saying it would be "shameful" if they were not probed.

Amnesty said in a September report it had credible evidence of government forces repeatedly using chemical weapons in a mountainous area of Darfur between January and August 2016 that killed between 200 and 250 people, including many children.

The UN's Organization for the Prohibition of Chemical Weapons (OPCW) said at the time that it needed more information and evidence to draw any conclusion based on Amnesty's report.

Amnesty timed its fresh call for a full and independent investigation by OPCW to coincide with the start on Tuesday of a four-day meeting of the UN watchdog's executive council in The Hague.

"Failure by (OPCW) member states to trigger the investigation would be a monumental and shameful abdication of duty," Michelle Kagari of Amnesty International said in a statement.

Some OPCW member states had expressed concerns over these "cruel" attacks but that was not enough, Kagari said.

"They must ensure concrete steps are taken to determine the full nature and extent of Sudan’s chemical weapons programme, and demand that Sudan fully cooperates with the OPCW,” she.

Amnesty said the attacks were part of a military operation against the rebel Sudan Liberation Army - Abdul Wahid (SLA/AW) group, which Khartoum accuses of ambushing military convoys and attacking civilians.

Tens of thousands of people have been displaced in Jebel Marra since January 2016 by fighting between the two sides, the United Nations says.

Deadly conflict broke out in Darfur in 2003 when ethnic minority groups took up arms against Bashir's Arab-dominated government, which launched a brutal counter-insurgency.

At least 300,000 people have since been killed and 2.5 million displaced in Darfur, the UN says.

Bashir is wanted by the International Criminal Court on alleged war crimes and genocide charges related to Darfur, which he denies.

Sudan, a signatory to the Chemical Weapons Convention, insists the Darfur conflict has ended and wants UN peacekeepers deployed in the region since 2007 to leave.