Women's Day: A painter finds inspiration in the islands 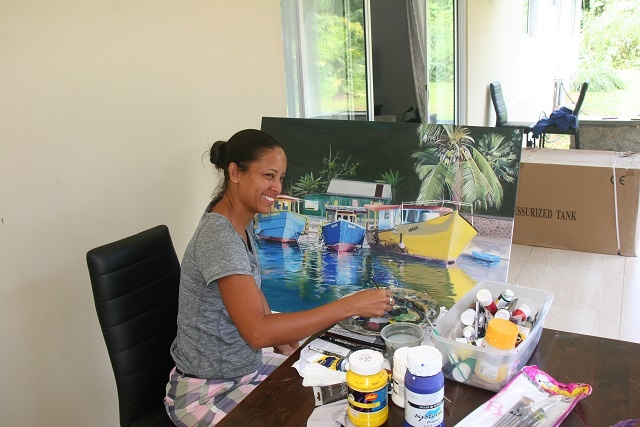 (Seychelles News Agency) - Up the mountain at Mont Simpson in the northern district of Bel Ombre, where nature grows wild and in abundance, Frances Chang-Him spends days and weeks in her studio transferring her inspirations into life-like paintings.

The budding artist, who favors acrylic on canvas, admits that she has found her calling rather late in life.

“I have always loved drawing and painting, but after doing my A (Advanced) level in arts, I worked in different sectors but I must admit I never got the sense of fulfilment.”

But two years ago Frances made the move to paint full time, one she doesn’t regret and wished she had made a long time ago. Now she spends her days capturing picturesque landscapes, plants, flowers, animals and a variety of scenes such as boats anchored at the bay at Bel Ombre. Another scene she has captured in paint is that of a woman in traditional attire doing the laundry at the river, a scene that has faded from modern view.

“I hope to do some work on Praslin, well all other islands if I can. I have just been offered the possibility of doing some work on Curieuse,” said the ever smiling Frances, who admits that she does not like to paint traditional architecture as she says a lot of artists are into.

“I want to be innovative and to depict things differently and give people something new and fresh.” The flower of a railway creeper or ipomoea cairica, captured in the early morning with dew still on it is one of Frances’s latest paintings.

Frances also works on portraits and she says that one of her late mother, beloved dentist Suzy Chang-Him, and her dad, former Archbishop French Chang-Him, are some portraits that she is contemplating doing. Some of Frances’s works are currently on display at H Resort and Fishermen’s Cove.

The artist can be contacted at her Studio -- Koko Studio Mont Simpson on 248 2584517 or  via email franceschanghim@gmail.com