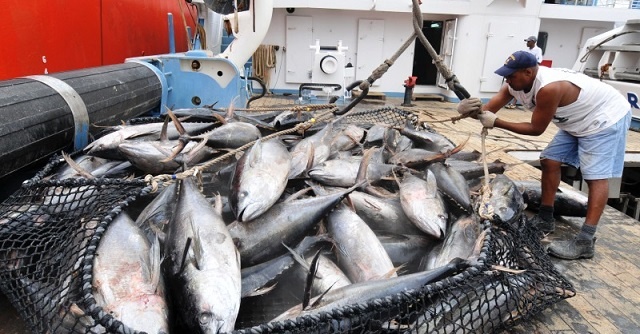 The decision to reduce fishing allowances of yellowfin tuna by 15 percent was taken by the IOTC in June last year. (Seychelles Nation)

(Seychelles News Agency) - Maldives is the only country to object to Seychelles’ request to use 2015 as the reference year to achieve the 15 percent reduction in yellowfin tuna catch, said the Executive Secretary of the Indian Ocean Tuna Commission (IOTC).

According to an IOTC resolution last year, all purse seiners of member countries were to reduce their catch using 2014 as their base year.

In a meeting held at the start of the year, the chief fisheries officer at Seychelles Fishing Authority (SFA), Vincent Lucas, said that “we will be at a disadvantage if we use the base year 2014, as we had eight vessels then and currently have 13 vessels.”

Alexandro Anganuzzi said that the request to use 2015 as a baseline was circulated to all IOTC member countries for their consideration.

“If no country expresses an objection, then it would be considered as accepted. For the time being, Maldives has indicated its disagreement with the Seychelles' request,” said Anganuzzi.

The decision to reduce fishing allowances of yellowfin tuna by 15 percent was taken by the IOTC in June last year. This came after scientists advised IOTC’s member countries that the population of yellowfin tuna in the Indian Ocean was below its optimum levels.

“If Seychelles were not to comply, it is unclear what would be the actions that the other members would take. There are no standard sanctions for such an action, and the IOTC members would have to discuss and agree what route to take if Seychelles decides that it cannot comply with the measure as is,” said Anganuzzi.

The chair of the SFA, Philippe Michaud, told SNA that the subject will be discussed in the 21st session of the IOTC that will be held on May 22 in Indonesia.

Seychelles is yet to implement measures to achieve the 15 percent reduction. As of January, purse seiners were sending weekly reports to monitor their catch until the end of March.

Discussions will be held after all statistics have been collected to establish measures that will be put in place once the limit is being reached.

SFA met with stakeholders in January where they agreed to implement if necessary one of the measures to curtail the fishing of yellowfin tuna which is reducing the number of Fish Aggregating Devices (FAD) on a vessel.