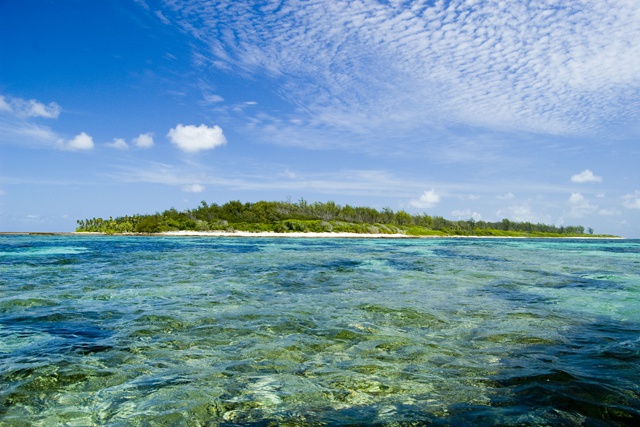 The Seychelles archipelago of 115 islands are amongst the 52 small island states facing the threat of sea level rise (Gerard Larose, STB)

(Seychelles News Agency) - Climate change experts have predicted that rising sea levels affecting the world’s 52 small island states, will be as much as four times higher than the rest of the world. The forecast was made recently in the SIDS Foresight Report, issued by the United Nations’ Environment Programme (UNEP).

Rising sea levels remain the biggest threat to the environmental and socio-economic stability of small island developing states (SIDS), and increased levels of vulnerability means losses that run into trillions of dollars each year, according to UNEP.

The SIDS Foresight Report, which was produced by a panel of 11 SIDS experts, presents the outcome of the foresight exercise and is one of UNEP's contributions to the Third International SIDS Conference, which will take place in Samoa in September this year. It identified the impact of sea level rise as the chief concern among a laundry list of twenty emerging issues impacting the environmental resilience and sustainable development of SIDS. Other issues include coastal overpopulation, land capacity, invasive alien species and threats from chemicals and waste.

“Rio+20 emphasized that SIDS have unique vulnerabilities and require special attention during the evolution of the sustainable development agenda in order to achieve the gains required to lift people out of poverty, create green jobs and provide sustainable energy for all,” said UN Under-Secretary-General and UNEP Executive Director Achim Steiner at the release of the report in Bridgetown, Barbados on World Environment Day last week.

“For example, these 52 nations, home to over 62 million people, emit less than one per cent of global greenhouse gases, yet they suffer disproportionately from the climate change that global emissions cause.”

However, Steiner is of the opinion that all is not lost. He says studies have shown that future developmental setbacks for SIDS can be averted ahead of time.

“It is up to the international community to support SIDS - not least through building momentum towards a robust climate agreement - to be agreed in 2015, which will cut emissions and minimize the threat of climate change for these nations," he added.

In the meantime, diplomatic efforts to bring the majority of world powers to agree to a climate change treaty have been stalled.

According to the BBC, the UN climate talks in Bonn, Germany, sparked angry reaction from SIDS negotiators such as Ronny Jumeau, the Seychelles climate change ambassador, when less than half the expected environment ministers did not turn up for the UN’s Bonn Climate Change Conference last Friday.

"Obviously as negotiators we are disappointed that ministers haven't turned up," said Ambassador Ronny Jumeau in his interview with the BBC. He said that many of those who came did not make new commitments on emissions or climate finance during their presentations.

"I think what we saw on the screens and the lack of ministers goes together. They didn't have anything to put up there or they were ashamed to do it."

The ministers were due to discuss the deadline to achieve a new climate treaty.

"They agreed last year in Warsaw and they have now broken that," said Mohammed Adow from Christian Aid told the BBC..

Seychelles, already in the trenches of fight against climate change

Climate change is a battle which the Seychelles, an archipelago of over 100 coralline and granitic islands in the western Indian Ocean, is already fighting in the trenches.

The bountiful coral reefs of Seychelles were affected by coral bleaching due to the 1998 El Niño weather phenomenon, leaving stretches of pristine coast vulnerable to erosion, and the inhabited islands, usually far-removed from severe weather, received a battering in January 2013 by Tropical Storm Felleng, which caused widespread flooding, resulting in approximately $8.3 million worth of damages and losses.

The magnitude and frequency of these types of weather and climate-related hazards may only escalate in the years to come, warn the experts, and this is expected to have a knock-on effect on the tourism, agriculture and fisheries sectors as well as health, fresh water supplies and other infrastructure, unless effective policies to protect oceans and the environment are put into place.

The concept of developing sustainable, efficient, innovative and clean-technology methods to provide for human needs is the core of the blue economy model supported and spearheaded by the government of Seychelles to bring about a change in mindset toward the entire economic development process of SIDS.

It is hoped that the ‘blue economy’ initiative will help create a sustainable and responsible pattern of oceanic resources development that will help to safeguard food, jobs and the economic development opportunities provided by the world’s oceans.