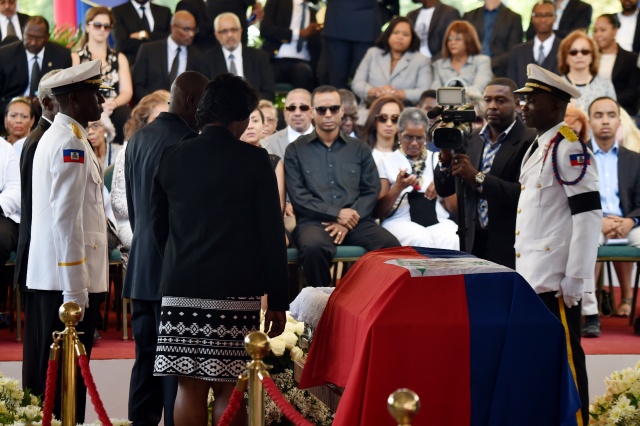 Haitian President, Jovenel Moise and first lady Marie Martine Moïse, pay their respects during a ceremony for former Haitian President, Rene Preval at Haitian National Pantheon Museum, in Port-au-Prince, on March 10, 2017.
The viewing for Preval, who died Friday aged 74, was held at the museum on the Champ de Mars, the capital Port-au-Prince's main park. His funeral is set for Saturday. (Hector Retamal/AFP)

(AFP) - Former Haitian President Rene Preval was buried Saturday after a state funeral in Port-au-Prince, a final tribute to a beloved champion of the rural poor.

Preval, who served two terms as president, died on March 3 at age 74. His sister told local media that he had suffered a heart attack.

In stands draped in Haitian flags, family and close colleagues of the former leader gathered at the funeral. Sitting in full sunlight, guests who had arrived early in the morning were given straw hats typical of rural areas beloved by the former president.

Later, as rain fell, a funeral procession took the body 200 kilometers (120 miles) north to Preval's father's native village of Marmelade. There, the late president was laid to rest at the edge of a lake located on a farm -- a fitting place for an agronomist by trade who was always deeply attached to the land and the people who worked it.

With a reputation as an honest and efficient administrator, Preval served as president of Haiti -- the poorest country in the Western hemisphere with a long history of political violence -- in 1996-2001 and again from 2006-2011.

He remains the only leader in Haiti's history to have completed his two terms -- the constitutional limit -- without suffering a coup d'etat or being forced into exile.

"During his two terms, Rene Preval managed to keep a degree of balance in Haitian political life," the current president, Jovenel Moise, said at the funeral ceremony.

"He is a man who gave so much of himself that it would be impossible to imagine the history of these last 30 years without him," he added.

Jocelerme Privert, who held office as interim president from 2016 to 2017 during the country's electoral crisis, was an adviser to Preval's cabinet and stressed the importance of maintaining the consensus promoted by the leader known to the population as "Ti Rene."

"For him, no price was too high when it came to finding a consensus," Privert told AFP.

"I say that Rene is the father of this politically stable and socially calmed down Haiti."

Preval's youngest daughter, Patricia, told the congregation her father did not get into politics because he liked it but rather to serve his country's destitute people.

"Politics for him was nothing more than a way for him to contribute to development, she said.

A moderate leftist, Preval first served as prime minister to ex-president Jean-Bertrand Aristide from February 1991 until the government was toppled in September that year.

Both politicians enjoyed huge support among millions of impoverished Haitians, many of them living in the capital's violent slums.

But in the early 2000's Preval distanced himself from Aristide.

While Moise and a number of Haiti's political leaders paid respects Friday to Preval on the eve of his state funeral, Aristide did not attend -- a notable absence.

Six days of national mourning were held before the funeral.

Born on January 17, 1943 to a former minister, Preval went into exile with his family in 1963. He waited tables in restaurants in the United States in the 1970s and returned a decade later to Haiti to open a bakery.

After the fall of the Duvalier dictatorship in 1986, Preval was active in working-class organizations and met Aristide, who after becoming president named Preval prime minister in 1991.

During his second term Preval's popularity suffered after a massive earthquake struck in 2010, killing more than 220,000 people. Critics said he had shown a lack of leadership after the disaster.

He rarely ventured into the public eye in recent years but nevertheless remained a key political figure.

Divorced and remarried, Preval had two daughters and one son.