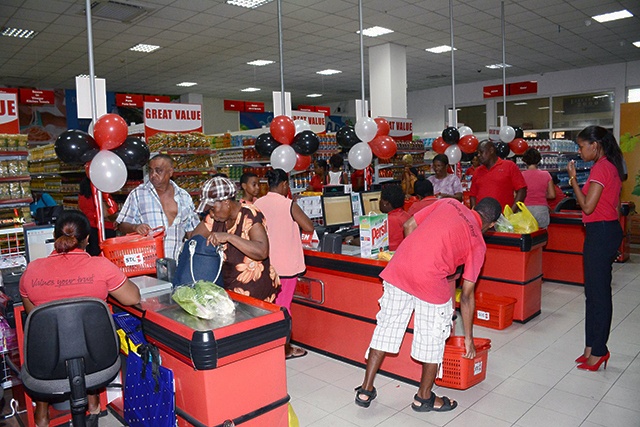 (Seychelles News Agency) - As I snaked past the first two rows of shelves at the newly reopened Seychelles Trading Company supermarket, endless chatter of amazement filled the room while the element of surprise radiated on the visitors' faces. Quality lined each shelf.

I stood in disbelief while deciding where to turn my focus in this maze of goods. But I soon figured it out: I rejoiced at the sight of the imported wine, thinking of how a new bottle would serve as a nice appetizer during a home cooked meal. I chose a sleek bottle along with two cans of pistachios.

At the entrance the sleek glass door parted ways as more people rushed in. Satisfied with the front row, I weaved through a crowd of people drooling over a selection of spices. Something caught my attention. It was .. MY FAVORITE: an abundance of tantalizing looking fruits and vegetables containing an array of colors that could match any rainbow.

Walking past the produce, it was like I was heading back into a time machine. What will I discover next? The quick tour revealed immense shopping opportunities, which tempted me to delve deeper and into the aisle beyond.

The STC opened the doors to its new retail outlet on Saturday, a facility that has been relocated to the Orion Mall in the heart of the capital, Victoria.

The opening ceremony was orchestrated by the staff and the chief executive of STC, Veronique Laporte, who recognized the important contribution that the employees have played in making the supermarket a success.

“This is another milestone for us,” said an emotional Laporte to her employees. “Despite of the many critics out there, remember that you have made it entirely for the people of Seychelles.”

The chief executive also shared that the supermarket is a social investment and will attract more homebuyers, which will in turn benefit other businesses at the Orion Mall complex.

After the chairperson of STC, Rebecca Loustau-Lalanne and Laporte cut down the ribbon officially opening the supermarket, invitees were free to indulge in the range of commodities, while the counters cashed in their first group of exited clients.

Laporte then guided us on a personal tour of the store.

This supermarket endeavors to ease the live of those who are commuting by bus and for residents around who can easily access this venue by foot,” Laporte said.

The iconic supermarket of STC has been relocated from its position at Albert Street following a decision by the management as the building was deemed unsafe. The building is due for a makeover and once that is done STC will move back in.

A customer that was busy reading the labels on a food can grope in her hands, Merna Agricole, said that wherever the shop goes it will remain the best shop for the people.

“I have been waiting for it to open since it closed down in February,” Agricole said. “The goods are always affordable and of the best quality.