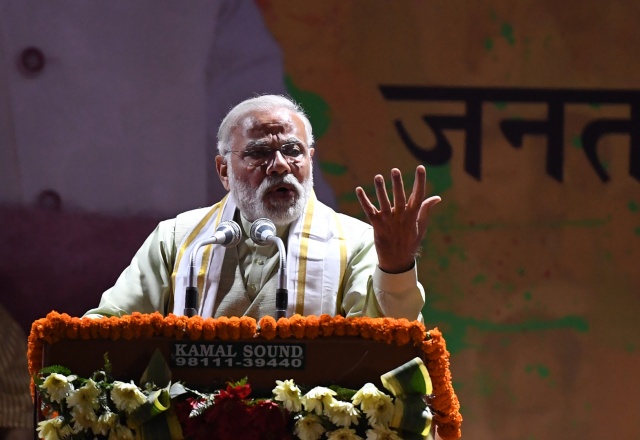 Indian Prime Minister Narendra Modi delivers a victory speech at the Bharatiya Janata Party (BJP) headquarters in New Delhi on March 12, 2017, a day after votes were counted in legislative assembly elections in five Indian states. Narendra Modi's party won a landslide victory in India's most populous state in a massive vote of confidence for the prime minister halfway into his first term. Modi's Hindu nationalist Bharatiya Janata Party won a surprise absolute majority in Uttar Pradesh in the north, which is home to 220 million people and seen as a key indicator of national politics. (Prakash SINGH / AFP)

(AFP) - Rebounding from a self-inflicted banknote crisis to deliver his party a stunning victory in state polls, Prime Minister Narendra Modi's dominance mirrors that of India's early independence leaders and bodes well for his re-election in 2019, analysts say.

Modi's Bharatiya Janata Party won a surprise absolute majority in Uttar Pradesh at the weekend, a result not seen in decades in the northern state that's home to 220 million people and seen as a bellwether of national politics.

It also won a majority in Uttarakhand and despite coming second will form governments in Goa and Manipur, the latter a remote eastern state where the Hindu nationalist party held zero seats before polling day.

"A new India is emerging," Modi declared on Twitter, nearly three years after he came to office pledging inclusive government and a "shining India" that would provide jobs for a growing youth population.

Instead of fielding a candidate for chief minister in Uttar Pradesh, Modi spearheaded the campaign himself, attending nearly a rally a day for the better part of a month.

The 66-year-old banked that his charisma and thundering rhetoric from the rally pulpit, both used to spectacular effect in the 2014 general election, would sway votes his way again.

The risky strategy, which massively backfired in Bihar state polls in 2015, paid off: Modi floored his doubters as the BJP swept 312 of the state's 403 assembly seats.

The party declared Modi the most popular prime minister since independence, the first leader since Jawaharlal Nehru and Indira Gandhi whose force of personality commanded adulation and ensured broad mandates.

"Since those days we've never seen one individual dominate the polity in the way Narendra Modi has been able to," Paranjoy Guha Thakurta, editor of the Economic and Political Weekly, told AFP.

"This is perhaps the kind of sweeping victory we haven't seen in India for a very, very long time."

Modi won the first overall majority in three decades in the 2014 election but his agenda has been hampered in the upper house of parliament, slowing the pace of promised reforms, fostering disillusionment and earning jeers from his opponents.

But the key victory in Uttar Pradesh will see Modi wield a command over parliament rarely seen in India’s coalition-based politics, and able to pursue more controversial measures.

It will also embolden him in addressing security concerns, most notably Pakistan, and burnish his standing on the world stage, particularly as India pushes for a permanent seat on the UN Security Council.

There was much speculation the state elections would be a referendum on "demonetisation" -- Modi's shock decision in November to pull all high-value banknotes from circulation.

The policy was designed to flush out tax cheats but it triggered a chronic currency shortage and chaos in a country where most transactions are cash-based.

Indians were forced to queue for hours to exchange their suddenly worthless bills, and the poor struggled to buy daily essentials.

The anticipated backlash -- though encouraged by his opponents -- never eventuated. Modi turned the disruption on its head, tapping into popular anger over corruption and selling the hardship as necessary pain to hit the rich.

"He appeals to emotion. The fact he was able to project demonetisation in this manner says a lot about his ability to convert what many would believe would be his liability into an electoral asset," Thakurta said.

By courting the votes of poorer Indians, the BJP broadened its appeal beyond the traders and middle class perceived as its traditional support base.

"The reinvention of the BJP, particularly Modi as a messiah of the poor, is complete," ran an editorial in India's Sunday Business Standard newspaper.

The BJP -- a right-wing Hindu party -- did exploit religious divisions in Uttar Pradesh, painting their opponents as pandering to the state's sizeable Muslim population.

The BJP did not field a single Muslim candidate in the state -- despite one in five following Islam -- underscoring its "majoritarian outlook", Thakurta said.

Modi assured voters he would use this "emphatic win" to deliver his outstanding reforms, something his political opponents will be keenly watching as he seeks re-election in 2019.

"Earlier parties were scared to fight elections on development. The strength of the poor and the aspirations of the middle class will take India to new heights," he told supporters at a massive victory parade in New Delhi.

With a favourable parliament in his pocket, and a massive vote of confidence halfway through his term, Modi looks well-placed to retain India's stewardship for another term, analysts say.

"More than the party, this is a victory for the Modi brand," Sanjay Kumar, from the Centre for the Study of Developing Societies, told AFP.