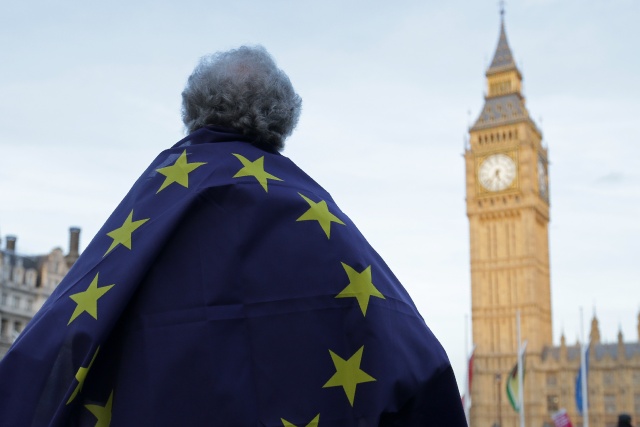 A protester draped in a European Union flag takes part in a protest in support of an amendment to guarantee legal status of EU citizens, outside the Houses of Parliament in London on March 13, 2017. British Prime Minister Theresa May feared parliament would stand in her way in implementing Brexit but the opposition crumbled and she prepares to open negotiations with the wind in her sails. (Daniel LEAL-OLIVAS / AFP)

(AFP) - British Prime Minister Theresa May prepares to open negotiations to leave the EU having finally overcome opposition in parliament, but she now faces the monumental task of thrashing out details of the divorce.

And with Scotland on the brink of making a new bid for independence and warning signs that the Brexit vote is beginning to hit the economy, political analysts warned that May still faces plenty of obstacles.

Warnings from EU leaders that Britain will have to pay a hefty exit bill and face tough conditions for leaving the bloc have added to the uncertainty.

On the domestic front, May has moved deftly at the start of a two-year process filled with inevitable compromises and risks.

Parliament gave final approval on Monday to a bill empowering the prime minister to begin Brexit, clearing her path to embark on the delicate task at any time.

Earlier, a threatened rebellion in the lower House of Commons over parliament's say on the final Brexit deal failed to materialise, as none of May's Conservative Party MPs voted against her, although a handful abstained.

The vote made clear how, eight months after taking office, May is enjoying an extended honeymoon, boosted by a weak opposition, relatively economic stability and an aggressively eurosceptic press.

Despite having campaigned to stay in the EU in last June's referendum, May has promised a clean break with Brussels, leaving the European single market in order to control mass migration from the bloc.

She has support from right-wing Conservatives and most critics of Brexit have fallen silent for fear of being accused of trying to undo referendum result.

"The thing historians will think quite strange is that, given that there's no majority in the country and no majority in parliament for a hard Brexit, how are we getting a hard Brexit?" said Charles Grant, director of the Centre for European Reform.

"The answer is there's no opposition and the Tory party, although a lot of it is quite soft, they are very scared of the eurosceptic newspaper groups."

The Conservatives are 18 or 19 points ahead of the opposition Labour party, which is deeply divided under leftist leader Jeremy Corbyn and struggling to articulate a clear message on Brexit.

Last month the Conservatives won a by-election in a Brexit-backing, Labour working-class seat in northern England -- the first such victory for 35 years.

May's majority in the Commons is slim, however, and some senior Tories have urged her to call a snap election to bolster her support.

"As British law needs to be amended countless times to take account of leaving the EU treaties, the government could face many close votes, concessions or defeats as it tries to implement Brexit," said former leader William Hague.

Decades-old splits in the Conservatives over Europe may also resurface -- the eurosceptics are in charge now, but most Tories wanted to stay in the EU.

"The unity of the Tory party is shakier than it seems," Bale told AFP.

May has promised to listen to ordinary voters buffeted by the winds of globalisation and her personal popularity has been riding high in polls.

But she will be sitting across the table from EU leaders who face nationalist movements in their own countries and fear Britain's exit may only be the first.

May has taken pains in recent weeks to show goodwill, stressing that she does not want Brexit to damage the EU, and her decision in January to set out her negotiating goals was welcomed for providing clarity.

She plans to take just two years to agree the divorce and a new trade deal and faces the possibility of leaving without an agreement -- a scenario that business leaders have compared to falling off a cliff.

The resilience of the economy has so far helped May, as pre-referendum warnings that a Brexit vote would spark a recession have so far failed to materialise.

But deep uncertainty lies ahead as Britain prepares to renegotiate ties with its biggest trading partner, the single European market of 500 million consumers.

"Nothing has gone wrong yet. But it's early days. If the economy turns sour, then she may get worried," Grant said.

General » Be a reporter: Write and send your article » Subscribe for news alert
Tags: Britain, EU, politics, Brexit, May