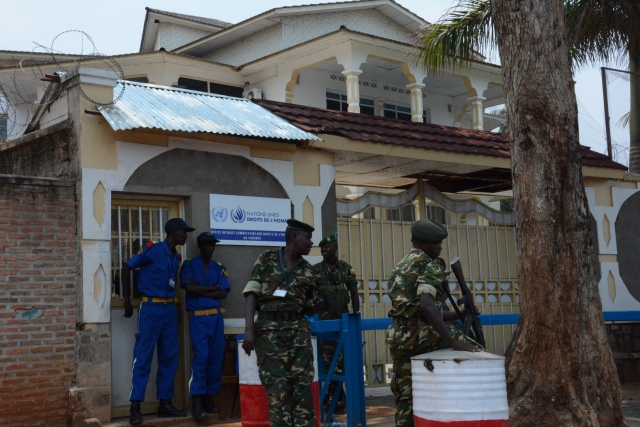 Soldiers secure the office of the United Nations Human Rights Commissioner in Bujumbura, during a demomstration against a report by investigators tasked by the UN Human Rights Council with probing rights abuses in Burundi since it descended into violence in April 2015, over President Pierre Nkurunziza's controversial decision to run for a third term. Burundi's government is behind systematic human rights violations, including executions and torture, UN investigators said, warning of the looming risk of "genocide". (Tony KARUMBA / AFP)

(AFP) - The UN Security Council on Monday said it was disturbed by reports of torture and forced disappearances in Burundi but ignored calls from rights groups for sanctions.

A French-drafted statement was adopted unanimously after some wrangling with Russia, China and Egypt, which oppose sanctions.

The council noted that the security situation in Burundi "has remained generally calm," but said it was "alarmed by the increasing numbers of refugees leaving the country and disturbed by reports of torture, forced disappearances, and killings."

Hundreds have died and 390,000 people have fled since the country descended into violence in April 2015 after President Pierre Nkurunziza announced plans to run for a third term, which he went on to win.

The council threw its weight behind a proposal by mediator Benjamin Mkapa, the former president of Tanzania, to hold a regional summit to press the government and the opposition to open up negotiations.

Council members called on Burundi's neighbors to "contribute to a solution to the crisis" and "refrain from supporting the activities of armed movements in any way," in an apparent reference to Rwanda.

They urged the government in Burundi to sign an agreement with the African Union to fully deploy human rights observers and military experts. Only a handful have been allowed into the country.

The council in July authorized the deployment of up to 228 UN police to Burundi to monitor security and human rights, but the government has blocked progress on that force.

In a report sent to the council last month, UN Secretary-General Antonio Guterres said he was "very concerned" by statements from Nkurunziza, in power since 2005, suggesting he could seek a fourth term of office.

Guterres said such a move "would risk intensifying the crisis."