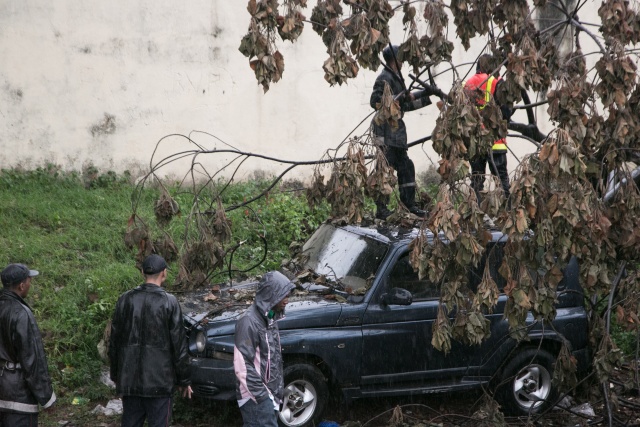 Malagasy firefighters work to remove a fallen tree from a car caused by tropical cyclone Enawo in Antananarivo, Madagascar, on March 8, 2017. At least four people have been killed by tropical cyclone Enawo in Madagascar, the prime minister said on March 8, 2017, as the storm tracked towards the capital Antananarivo threatening severe flooding. (RIJASOLO / AFP)

(AFP) - A cyclone that slammed into Madagascar last week killed 78 people and affected 400,000, the authorities said on Tuesday as they classed the event a national disaster.

A quarter of a million of people were displaced from their homes, 18 are listed as missing and 250 as injured, the National Bureau for Risk and Catastrophe Management (BNGRC) said in a statement.

A previous toll, released on Saturday, gave at least 50 people dead and 176,000 affected.

Storm Enawo slammed into the northeast of the island on March 7, packing gusts of up to 290 kilometres (180 miles) per hour and delivering drenching rain.

It then moved southwards, its winds weakening, before hitting the capital.

The cyclone was the most powerful to strike the island since 2012, according to the Red Cross.

The storm hit just as the island was grappling with an intense drought that forced up the price of rice and worsened food insecurity, especially in the south.