Namibia tribes sue Germany in US over colonial-era genocide 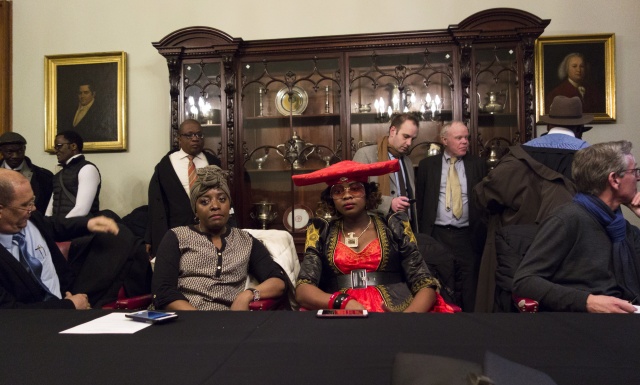 Members of the Namibian delegation and members of the press wait for the arrival of Herero chief Vekuii Rukoro to a news conference on March 16, 2017 in New York. More than a century after a long-hushed genocide took place in Namibia while under German colonial rule, descendants of the victims are getting their day in court in New York for the first time Thursday. In one of the darkest chapters of African colonial history, tens of thousands of Herero and Nama people were killed from 1904 to 1908. The two countries have been in talks for the past two years about a joint declaration on the massacres. (DON EMMERT / AFP)

(AFP) - More than a century after a long-hushed genocide took place in Namibia while under German colonial rule, descendants of the victims had their day in court in New York for the first time Thursday.

In one of the darkest chapters of African colonial history, tens of thousands of Herero and Nama people were killed from 1904 to 1908.

Germany and Namibia have been in talks for the past two years about a joint declaration on the massacres.

The tribes filed their class-action lawsuit in January seeking compensation for "incalculable damages" and demanding that they be included in the negotiations between the two countries.

The 15 or so tribal representatives at the hearing -- who came from Namibia, Canada and midwest America, some wearing colonial-era traditional dress -- won their first victory Thursday when Judge Laura Taylor Swain scheduled another hearing for July 21.

"When I heard that she said the hearing can take place -- that was the greatest success we have achieved. This is the sign that we are the winners," said Ida Hoffmann, 69, a Namibian MP and Nama representative.

While some German officials have acknowledged that a genocide occurred, the government has fallen short of an official declaration.

And Berlin repeatedly refused to pay direct reparations, saying that its development aid worth hundreds of millions of euros since Namibia's independence from South Africa in 1990 was "for the benefit of all Namibians."

A foreign ministry spokesman described the aid as "generous," saying it includes "record" amounts per individual and points to Germany's "responsibility."

German settlers grabbed land, cattle and other means of subsistence from the locals, triggering a Herero revolt on January 12, 1904 in which they killed 123 German civilians.

In the bloody Battle of Waterberg in August 1904, around 80,000 Herero fled with women and children toward Botswana. German troops went after them across what is now known as the Kalahari Desert. Only 15,000 Herero survived.

The smaller Nama tribe faced a similar fate. Around 10,000 of them were killed as they sought to rebel against the Germans during the conflict.

The lawsuit alleges that from 1885 to 1903, about a quarter of Herero and Nama lands -- thousands of square miles -- were taken without compensation by German settlers with the explicit consent of German colonial authorities.

It also claims that those authorities turned a blind eye to rapes by settlers of Herero and Nama women and girls, and the use of forced labor.

In addition to land and property grabs, there were concentration camps, exterminations and scientific experiments on "specimens" of what the settlers considered to be an inferior race -- as if setting the stage for the major genocides of the 20th century.

"What happened to the Jews was only a perfection of what happened (to us)," said Vekuii Rukoro, identified as the paramount chief of the Herero people, who attended Thursday's hearing.

"I'm sure Germany will ask, 'How many billions?' I don't know, we need to sit around a table and hammer this out on the basis of give and take."

The lawsuit was filed under the Alien Tort Statute that allows non-US citizens to make claims in US federal court for international law violations.

Berlin has been tight-lipped about details of the deal being negotiated with Namibia, but the two tribes claim that their exclusion from the talks violates a United Nations declaration on indigenous people.

Kenneth McCallion, lawyer for the tribal groups, said he hoped Germany would "reconsider its position" on including them in the negotiations, and respond to the lawsuit if possible before the July hearing.

Africa » Be a reporter: Write and send your article » Subscribe for news alert
Tags: US, Namibia, Germany, diplomacy, genocide, court