'No sign' of more parcel bombs from Greece: minister 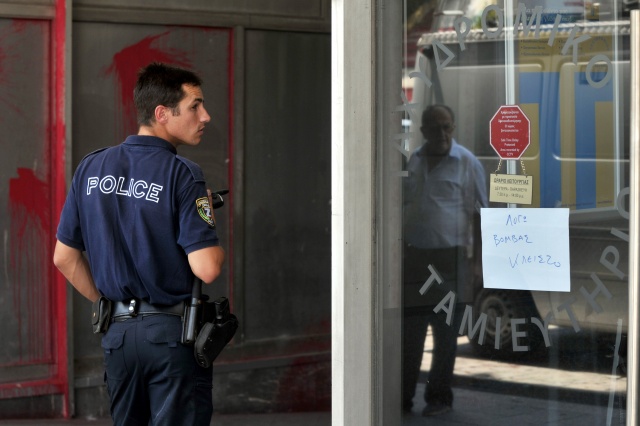 A policeman stands by the secured area outside the Greek Finance Ministry building and the Hellenic Postbank branch with a sign 'closed due to bomb" in Athens on August 5, 2010 after a bomb threat just prior to the sheduled press conference by Finance Minister George Papaconstantinou. Greece's Finance Minister George Papaconstantinou welcomed as "positive" a key EU-IMF audit which said the country had made progress in fighting its public finance crisis. (AFP PHOTO / Louisa Gouliamaki )

(AFP) - Greek police minister Nikos Toskas said Friday there was "no sign" of additional parcel bombs similar to the one that exploded at the IMF offices in Paris this week, which investigators believe was sent by a Greek militant group.

"There is no such sign," Toskas told Skai TV, adding that the "main thrust" of the Greek investigation was to determine how two parcel bombs evaded checks at the Athens airport.

Screening machines at the airport are "the best in Europe," Toskas said.

Sources close to the inquiry said they suspected a Greek anarchist group, the Conspiracy of Fire Nuclei, was behind the letter bomb that injured a secretary at the International Monetary Fund in Paris on Thursday.

Fragments of Greek stamps were found at the IMF offices where the letter bomb exploded, injuring the woman's face and hands.

The Conspiracy of Fire Nuclei is "likely behind" the Paris attack, a Greek police source told AFP in Athens, adding that French investigators had told their Greek counterparts that the package was sent from Athens.

Separately, a source close to the French inquiry said it was focusing on "an anarchist group".

The Conspiracy of Fire Nuclei had earlier claimed responsibility for an explosive device, also sent from Greece, that was discovered by the police at the offices of German Finance Minister Wolfgang Schaeuble.

The package was discovered on Wednesday, a day before Schaeuble was due to host his new US counterpart, Steven Mnuchin.

Many Greeks blame Germany and the IMF for imposing years of public-sector cuts and policy overhauls in exchange for bailout packages needed to prop up the debt-ridden country.

The group, which is considered a terror organisation by Washington, sent letter bombs to foreign embassies in Greece and to European leaders in 2010.