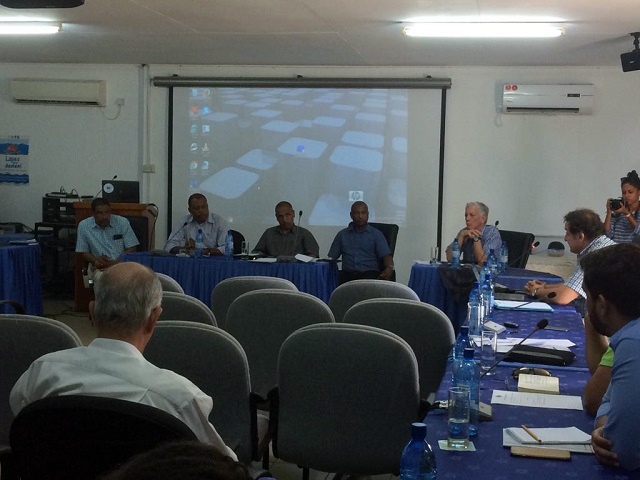 Regular meetings are being organized to have weekly reports from vessels on yellowfin catch that will be monitored until the end of March. (Salifa Magnan, Seychelles News Agency)

(Seychelles News Agency) - The economy of Seychelles will be negatively affected if the country conforms to the decision of the Indian Ocean Tuna Commission (IOTC) to use 2014 as the reference year to reduce yellowfin tuna catch by 15 percent, officials in the island nation's fishing industry said Friday

Officials have been working to find a way forward after the IOTC made the decision in June last year for purse seiners to reduce yellowfin fishing allowance at the beginning of 2017.

“Many people work around the tuna industry in Seychelles, and if the government, as a last resort, decides to stop fleets from fishing, there will also be a socio-economical impact on the country,” said Arthur de Bretagne, the General Manager at Ile du Port Handling Services (IPHS).

The fishing sector is the second main contributor to the island nation’s economy, and de Bretagne said that “if this pillar falls, Seychelles will be in big trouble.”

De Bretagne added that “a socio-economic study has to be done, because at the end of the day, whatever the decision made it will affect the economy of Seychelles.”

IOTC announced last year that yellowfin tuna was being over-exploited following a report of the Scientific Committee.

The chair of Seychelles Fishing Authority, Philippe Michaud said at the news conference on Friday that though the resolution requests for a 15 percent reduction for purse seiners, it does not mean to say that it will affect all countries in the same way.

“Seychelles is the country that is going to be the most affected and what we are really objecting to is that this is disproportionate. If we use the resolution as is, the impact on the total fishery [in Seychelles] will be 50 percent,” said Michaud.

The chair of SFA added that most of the other countries will have a much lower percentage of reduction.

Seychelles, an archipelago in the western Indian Ocean, has yet to implement measures as per the IOTC resolution. In an interview with SNA in January, the chief fisheries officer of SFA Vincent Lucas had said that regular meetings will be organized to have weekly reports from vessels on yellowfin catch that will be monitored until the end of March.

“By the end of March we will have some statistics, and from there we will discuss measures that we will put in place once we are reaching the limit,” Lucas had told SNA.

The ministry, along with SFA and stakeholders, made a request to the IOTC to allow Seychelles to use 2015 as the reference year.  In 2015 around 35,000 tonnes of yellowfin were caught whereas around 29,000 tonnes was caught in 2014. The Maldives is the only member country to have voiced objection to the Seychelles’ request.

The next IOTC meeting is due to be held on May 22 in Indonesia, and Seychelles will be pushing to have its case accepted by all member countries.

The Minister for Fisheries and Agriculture, Michael Benstrong, said that should the request not be approved, by June or July Seychelles will reach its limit and this will have an impact on all stakeholders linked to the tuna industry.

“If we are to use the 2014 base year it might result in 5 to 6 months of no fishing activity by purse seiners floating the Seychelles flag. By using the 2015 reference year we can fish until the end of the year,” said Benstrong.

First round of EU-Seychelles talks on fishing deal ends; next round in Brussels