FIFA World Cup fever hits Seychelles – Brazil, one of the favourite of the islanders 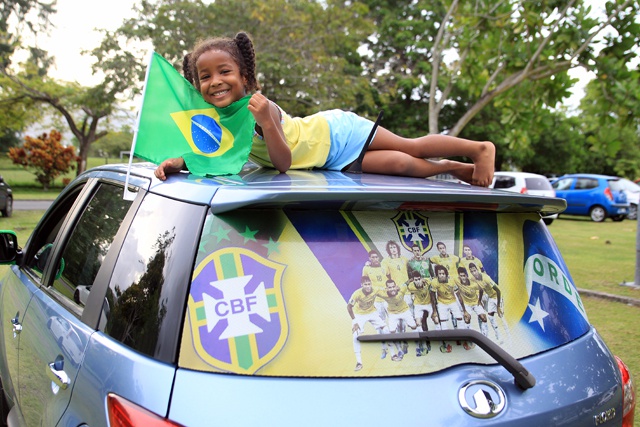 (Seychelles News Agency) - One day to go before the world’s football giants convene in Brazil for the FIFA World Cup, dubbed one of the biggest and most popular international sport events.

The 2014 World Cup will kick off tomorrow when the host country meets Croatia, in Brazil’s biggest city of Sao Paolo.

The concept of the world being ‘a global village' could not have been more real these past few weeks and will remain so over the next month ahead as the football World Cup fever hits the Seychelles, a small island state in the Indian Ocean.

Despite being thousands of kilometres away from the real action, Seychellois football fans have really been drawn deeply into the tournament which shows how passionate the locals are when it comes to world soccer.

From the youths to the older generation, many are planning to gather together be it at home or in public places having a TV set, at times biting their nails, sitting on the edge of their seats as the excitement builds up.

Going round Mahé, the main island of the archipelago, even on Praslin and La Digue the second and third most populated islands and surely on other islands of the archipelago, one would have thought that there are over thirty different nationalities living in each and every community.

Brazil, Germany, England, Argentina, Italy, Holland, Spain, even the US flags can be seen floating everywhere mostly on private vehicles, some with side mirror covers. Flags can also be seen hanging from roof tops of houses, fences, trees, and they come in various sizes.

Strangely enough though, there are barely any flags of Ivory Coast, Cameroon, Nigeria, Algeria or Ghana, the five African representatives at the event.

Asking around, the explanation given is as much as Seychelles is considered part of the African community, Seychellois citizens do like the African countries but they are not their favourite teams in the world of soccer.

“We are not as passionate about them as we are about the European and South American soccer superpowers,” some fans told SNA.

“I’m behind Argentina…..I have always been an ardent supporter……I believe they will do well this year…the team is really motivated,” says Jude Morel.

The sale of World Cup souvenir items such as flags, t-shirts and caps have been overwhelmingly popular especially on Mahé and Praslin.

Brazil’s popularity is evident as the host nation’s flags and other souvenir items have exceeded sales expectations. “Seychelles right now is a little Brazil and we will be dancing to the sound of Samba,” says one supporter. The other South American giant Argentina is also quite popular.

Many shops have seized the opportunity to make some extra money and even private individuals have been selling these items which as one said is selling like “hot potatoes”.

“We imported 800 flags and 800 caps… the first ones to be sold out were the Brazilian, Argentinian, and Italian items and people are still looking for more,” Arouna Latullipe from the Home Accessories shop situated at the Providence Industrial Estate, not far from the capital of Victoria told SNA.

“Surprisingly though, items relating to England and Germany are still in stock compared to past World Cup where we had many Seychellois fans supporting the two teams,” she added.

England seems quite popular amongst the locals though, but there is the general feeling that the team won’t be going too far in the competition. On the other hand there is high expectations for the defending World Cup champions Spain, to win the prestigious Cup once again.

Spain defeated Holland to win the title four years ago in South Africa.

Team passions build up, local media hypes up the mood

The only complaint so far is that some people have been snatching the flags from the fans’ vehicles for example, prompting football enthusiasts to call for the respect of other’s views stating that sports and in this case the FIFA world cup is supposed to bring people together, to promote peace, unity, fair play and of course friendly banter.

The local media has also been hyping up the soccer fever, for instance the islands’ only private radio station, Pure FM’s daily sports show ‘Pure Sports’ has been inundated by calls and texts from listeners who want to talk about their teams and giving early predictions.

Again Brazil, Argentina, Spain, France, Germany, Holland have dominated the airwave. The most surprising prediction so far came from a listener who calls himself “Mr Newcastle” and who supports the United States saying: “I’m 100 percent sure the final will be between the USA and England and off course the USA will win.”

Seychellois football fans will be able to follow all the matches live on the national broadcaster Seychelles Broadcasting Corporation (SBC) for free, as well the local cable television and satellite television providers.

In an article published on daily newspaper Seychelles Nation, SBC confirmed that it has entered into an agreement with the African Union of Broadcasting that will be providing the corporation with coverage of all the World Cup Matches.

The first FIFA World Cup which takes place every four years was held for the first time in 1930.

A total of 32 teams will be competing in the FIFA World Cup 2014, divided into 8 groups.

Excitement about the tournament is also building among the Brazilian public but the international media has been reporting on several protests as many Brazilians are still uneasy about the $11billion which has gone into hosting the tournament.