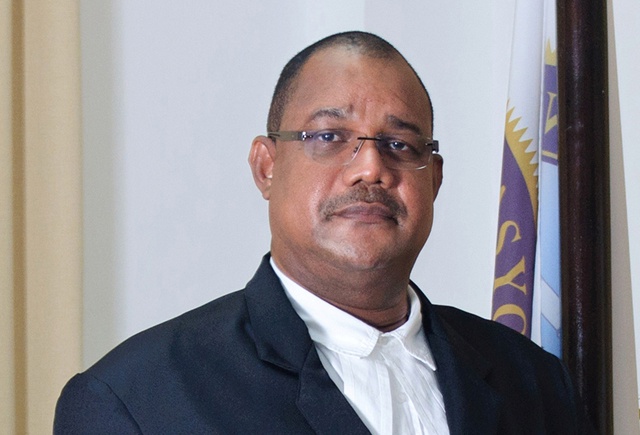 (Seychelles News Agency) - With a population of around only 90,000 people, it is forgivable to think that few people from the small Indian Ocean island nation of Seychelles would make their mark on the world, but evidence has proven this assumption to be false time and time again, with hundreds of Seychellois citizens receiving international awards and top honours in their fields, serving as further inspiration for their countrymen.

This time it is the turn of the Speaker of the Seychelles National Assembly, Dr Patrick Herminie, to be lauded. The Speaker was honoured by the Czech Republic in a glitzy affair at Černín Palace in Prague last week, according to the Czech radio station Radio Praha.

Dr Herminie received a prestigious Gratias Agit award, presented by Czech Foreign Minister Lubomír Zaorálek, along with 14 other recipients, including acclaimed Polish filmmaker Agnieszka Holland. The honour is reserved for those who have worked to promote the image of the beautiful and historic Central European country abroad.

“That’s why they are something like a very good promotion of the Czech Republic in the world. And when we take this very complicated history of our country in the 20th century its fascinating how these people are so many times and years devoting time to raising the name of the Czech Republic.

“They are fascinating figures and I’m glad that I have this opportunity to give them this award as something like a sign or a signal that we know about it and we appreciate it.”

Dr Herminie may be the Speaker of Parliament in his home country today and an “unofficial ambassador for the Czech Republic in the Seychelles” according to the 2014 Gratias Agit awards brochure, but thirty years ago he arrived in the then-Communist country of Czechoslovakia as a medical student, a time he remembers with fondness. It was the first time he had ever seen foods such as yoghurt and ham, he recalls.

“Well, those were the days,” he laughed. “I came in 1983 and I did one year of language in Mariánské Lázně, which was the school for learning the Czech language then.”

“Then I came to Prague to study medicine at Charles University. It was a very nice period in that I came at the very young age of 18, so most of my youth I spent here in Prague.”

The aspiring doctor found those years at medical school difficult because of the language barrier.

“Medicine was very tough because we had to learn it in Czech, and you can imagine doing a tough subject like medicine in a difficult language like Czech. It was not easy but somehow I managed.”

While Dr Herminie was in his fifth year of studies, in 1989, the Velvet Revolution took place, a peaceful transition from single-party Communist rule to a multi-party democracy. The heart of the action took place in Prague, with riot police suppressing a student protest that swelled into a 500,000-strong protest that spilled over into a general strike that eventually toppled the communist leaders.

When his studies ended the following year, Dr Herminie left to return to his island home. But even after 24 years, he hasn’t forgotten his student years in Prague and he has not forgotten the language.

Soon he may have someone closer to home to speak Czech with, as he says his eldest daughter is also studying medicine in Prague, carrying on the family business, as he puts it, of both practicing medicine and learning about Czech language and culture.

“I hope that my grandchildren will also come to Prague to study,” he said. “Because I know that the standard is very high and the discipline is good; these virtues, these values, have helped me to progress in life.”

As for the Gratias Agit award, he says it means a great deal to him because he has never forgotten his time in the Czech Republic.

“I came [back] here two or three times. I love the place. I love the people. I’ve got some friends in the Seychelles who are Czech. I’m happy that they recognize the work that I do back home to promote the Czech Republic.”