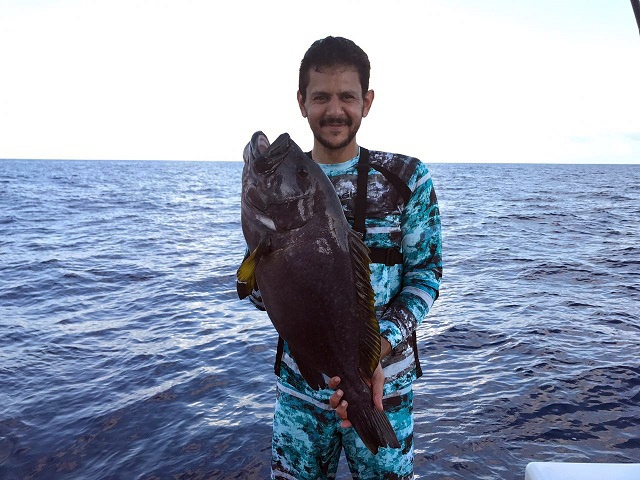 In order to break an IGFA record you need to follow special guidelines. A fisherman or angler can catch the biggest fish, but might still not be recognised as a world record. This is because they need a special rod and line as specified by IGFA. (Alain Khan)

(Seychelles News Agency) - A 22-year-old world record could be broken by a fish caught in Seychelles’ waters, the local representative of the International Game Fish Association (IGFA) said earlier this week.

The fish – a blue-and-yellow grouper -- was caught by angler Nawaf Sultan Al Madeed, who comes from Doha, Qatar.

The grouper weighted 5.40 kg and according to the representative of IGFA, Faizel Suleman, “The catch is a sizeable one and is well set for a world record breaker.”

Suleman said that the weight is way ahead of the world record currently being held by Mario Bruno -- at 3.66 kg for a grouper caught in Port Elisabeth in South Africa.

The fish was hooked in the fisher’s rod while fishing in the waters close to Eden Island, located on the eastern side of Mahe, the main island.

“We are going to send the weight recorded to the main headquarters of IGFA for the record to become official,” Suleman said.

Seychelles, a group of 115 islands in the western Indian Ocean, has been classified by IGFA as a world class fishing destination. It also currently maintains quite a number of IGAF records including that of the giant guitar fish and a humphead maori wrasse.

“There is such vast potential when it comes to our marine resources, but we need more local and visiting anglers to explore this domain so that we can break more IGFA records,” Suleman added.

Speaking to SNA, captain Alain Khan said that it took 5 minutes to bring on board the expected record-breaking grouper.

“After a little effort we manage to subdue it and we put it down in the fish box filled with ice,” Khan said.

He added that, “In order to break an IGFA record you need to follow special guidelines. A fisherman or angler can catch the biggest fish, but might still not be recognised as a world record. This is because they need a special rod and line as specified by IGFA.”

The International Game Fish Association is a non-profit organisation committed to the conservation of game fish and the promotion of responsible, ethical angling practices through science, education, rule making, record keeping and recognition of outstanding accomplishments in the field of angling.

Aside for his catch which smashed the record, Al Madeed was able to reel a giant trevally and a dog tooth tuna that was later released.