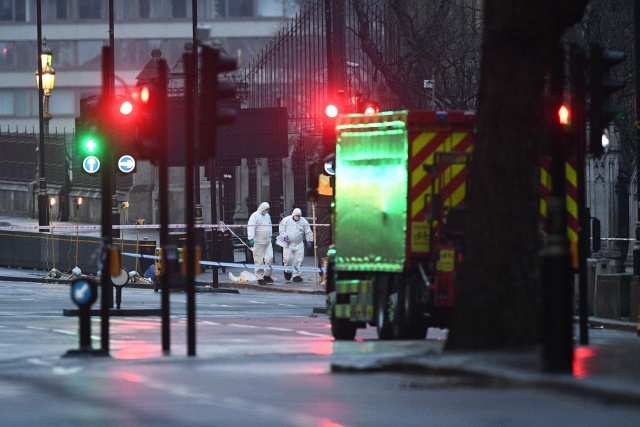 Forensic officers work at the scene of the attack by the Houses of Parliament on March 23, 2017 in London. Seven people have been arrested including in London and Birmingham over Wednesday's terror attack at the British parliament, the police said on today, revising down the number of victims to three people. (Justin TALLIS / AFP)

(AFP) - British police arrested seven people in armed raids Thursday linked to the deadly "Islamist-related" attacks the day before on the symbol of the country's democracy.

Britain's top anti-terror officer Mark Rowley also said police have revised down the number of victims from Wednesday's rampage to three from four. Some 40 people were wounded.

He said the raids included locations in London and the central city of Birmingham.

Defiant British MPs meanwhile vowed to return to work as normal after the lightning attack on the iconic parliament building in the shadow of Big Ben.

Authorities worked around the clock to piece together what happened when carnage was sown in the heart of London as the attacker ran down several pedestrians on nearby Westminster Bridge then charged at a policeman at the parliament gates, stabbing him to death with a large knife.

Armed officers shot the attacker dead but not before he had killed two members of the public and the 48-year policeman guarding the seat of British political power in the deadliest attack in the country since 2005.

Press Association news agency photos believed to be of the attacker lying on an ambulance stretcher showed a burly man wearing black clothes and a beard.

Other pictures showed two people being treated on the ground inside the vehicle entrance gates of parliament, with a knife visible on the cobblestones, while three shots were heard ringing out on video footage as terrified passers-by fled.

British lawmaker Mary Creagh told AFP there was "a real sense of panic" as the attack unfolded and a doctor at nearby St Thomas' Hospital said they were treating people with "catastrophic" injuries.

Prime Minister Theresa May described the attack as "sick and depraved" in a defiant address in which she affirmed parliament would meet as normal on Thursday.

Standing outside her Downing Street residence after an emergency cabinet meeting, May said Britain's alert level would remain unchanged at level four, or "severe".

"We will all move forward together, never giving in to terror and never allowing the voices of hate and evil to drive us apart," said May, dressed in black.

The prime minister was in parliament at the time of the attack and was ushered away in a silver car as gunfire rang out.

Rowley said on Wednesday police suspected they were dealing with "Islamist-related terrorism," adding that investigators believed they knew the assailant's identity.

Queen Elizabeth II postponed her appearance on Thursday to open the new headquarters of London's Metropolitan Police, where the force's flag flew at half-mast following the attack.

The attack came a year to the day after Islamic State jihadists killed 32 people in twin bomb attacks in Brussels and after a series of deadly assaults in Europe that had spared Britain -- until Wednesday.

Parliament was locked down for several hours and police evacuated hundreds of MPs and visitors to nearby Westminster Abbey and the Metropolitan Police headquarters.

An air ambulance flew in and police cordoned off a large area, while tourists on the London Eye, a popular visitor attraction, were left dangling up to 135 metres (443 feet) in the air for more than an hour during the attack.

"I saw three bodies lying on the ground and a whole lot of police. It was pretty terrifying," said Jack Hutchinson, 16, from the United States, who was stranded on the observation wheel with his parents.

Foreign Office minister Tobias Ellwood, whose brother Jonathan was killed in the 2002 Bali bombing, was pictured with his face smeared with blood helping to give first aid to the fatally wounded police officer.

The worst previous attack in London was in 2005 when four British suicide bombers inspired by Al-Qaeda targeted the transport system, killing 52 people.

Britain's last terror attack was last year's assassination of MP Jo Cox by a pro-Nazi sympathiser in her constituency in northern England.

Britain's allies reacted with shock and vowed to stand with London in the fight against terror while lights on the Eiffel Tower in Paris were switched off at midnight in solidarity with victims of the attack.

US President Donald Trump and French President Francois Hollande both spoke to May and Chancellor Angela Merkel said Germany stood with Britons "against all forms of terrorism".

"Spoke to UK Prime Minister Theresa May today to offer condolences on the terrorist attack in London," Trump tweeted.

The incident dominated Britain's front pages, with The Mirror describing it as an "attack on democracy" while London's Evening Standard carried the headline "Terror carnage at Westminster".

Several international tourists visiting one of London's most iconic sights were caught up in the violence.

A Portuguese man was hurt, the country's government said, while a seriously injured woman was rescued from the River Thames following the incident.

French Foreign Minister Jean-Marc Ayrault said he would travel to London on Thursday morning to visit three French pupils on a school trip who were among those hurt.