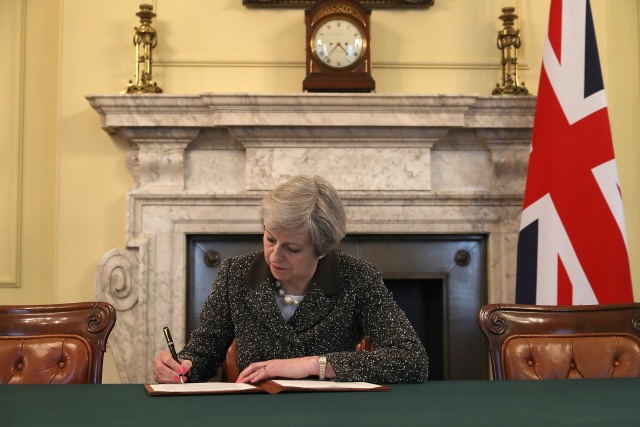 (AFP) - Britain formally launches the process for leaving the European Union on Wednesday, a historic step that has divided the country and thrown into question the future of the European project.

Just days after the EU's 60th birthday, Britain is poised to become the first country ever to seek a divorce, striking a blow at the heart of the union forged from the ashes of World War II.

Nine months since the shock British referendum vote to leave the EU, Prime Minister Theresa May will trigger Article 50 of the Lisbon Treaty, meaning Britain is set to leave the EU in 2019.

"We must no longer be defined by the votes we cast in the referendum -- but a determination to make a success of the result," May will tell MPs later on Wednesday, according to extracts of her speech released by her Downing Street office.

"The triggering of Article 50 is the moment for the country to come together," May will say, a day after Scotland's parliament voted in favour of holding a fresh referendum on independence from Britain, in a bid to hold on to EU ties.

May has already signed the Brexit letter to be delivered to EU president Donald Tusk on Wednesday.

The two leaders spoke by phone on Tuesday ahead of the momentous event.

The process has already split Britain, where 52 percent voted for Brexit last June, but 48 percent wanted to stay in the EU -- including a majority in Scotland, which has renewed its threat to secede.

On Tuesday, Scotland's semi-autonomous parliament backed a call by its nationalist government for a new referendum on independence before Brexit.

Scotland is particularly concerned about leaving Europe's single market -- the price May says must be paid to end mass migration, a key voter concern.

The prime minister rebuffed the referendum request and has vowed to fight for a new relationship with Brussels that will leave Britain stronger and more united than before.

The EU, too, is determined to preserve its own unity and has said that any Brexit deal must not encourage other countries to follow Britain out the door.

Britons are as divided as they were in the referendum.

Tens of thousands of people marched through London on Saturday demanding Britain keep its 44-year-old EU membership, urging politicians to "stop this madness".

But many are elated after waiting years for this moment, including 66-year-old pensioner Christine Garrett who was out shopping at a street market in Bethnal Green in east London.

"I think we could stand on our own two feet as a country. What do they do for us? Nothing," she said.

Pushing her pram nearby was Julia Rogers, 38, who disagreed saying: "It's going to be a disaster".

In the City of London financial hub, employees were mostly worried about the implications of Brexit.

"I think it's quite a sorry state of affairs," said Daniel Smith, 41, adding: "We've sort of backed ourselves into a corner that we can't get out of".

The EU is expected to issue a first response to Britain on Friday, followed by a summit of EU leaders on April 29 to adopt their own guidelines -- meaning it could be weeks before formal talks start.

Their priority is settling Britain's outstanding obligations, estimated between 55 and 60 billion euros ($59 and $65 billion) -- an early battle that could set the tone for the rest of the negotiations.

Both sides have also said they are keen to resolve the status of more than three million European nationals living in Britain after Brexit, and one million British expats living in the EU.

The two sides also want to ensure Brexit does not exacerbate tensions in Northern Ireland, the once troubled British province which will become the country's only hard border with the rest of the EU.

Britain also wants to reach a new free trade agreement within the two-year timeframe, although it has conceded that a transitional deal might be necessary to allow Britain to adapt to its new reality.

Many business leaders are deeply uneasy about May's decision to leave Europe's single market, a free trade area of 500 million people, fearing its impact on jobs and economic growth.

The Brexit vote sent the pound plunging, although economic growth has been largely stable since then.

With the challenges ahead, there is a real chance that negotiations will break down and Britain will be forced out of the EU without any deal in place.

This could be highly damaging for both sides, by erecting trade barriers where none now exist as well as creating huge legal uncertainty.

May has said that "no deal is better than a bad deal", and she has the support of pro-Brexit hardliners in her Conservative party, who have been campaigning for decades to leave the EU.

While talk of walking away has softened as the negotiations loom, experts say it may be her only trump card in a process in which the ticking clock means the EU will hold most of the cards.

"This marks the end of the period when our government was in control," said Professor Anand Menon, director of the "UK in a Changing Europe" programme.