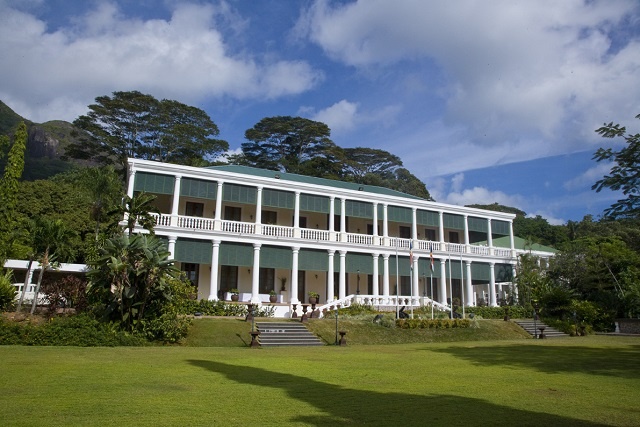 The State House used to be known as the Governors House, was the residence of the British Governors from 1912. (Gerard Larose)

(Seychelles News Agency) - As part of activities to commemorate Commonwealth Day, an exhibition was organised to showcase the British governors who worked in Seychelles from 1811 to 1976. The period was chosen because it was an important one in terms of structural development and economic growth for the island nation.

SNA brings you the 18 governors.

Sweet Escott was known for the reforms which he bought to the education system. He unveiled the Diamond Jubilee fountain in 1900 and inaugurated the clock tower on April 1, 1903. Sweet Escott Road in the district of Anse Royale in the south of Mahe bears his name.

Davidson opened the first government school and in 1909 opened the islands first water supply, taking water from the St Louis river and distributing it to Victoria. In 1910 he opened the Carnegie Library in Victoria. Davidson initiated the construction of the Governor’s House known as State House today.

O’Brien completed the construction of the Governor’s house which his predecessor started. In 1917 he established the breadfruit and other trees (protection) ordinance, which protected the colony’s natural food resources.

The Fiennes Esplanade and the Fiennes Institute were named after this governor. In 1919 he introduced paper currency and income tax to the islands. Fiennes also laid the foundation stone for what is today the Seychelles Hospital on June 12, 1920.

He officially opened the now Seychelles Hospital in November 1924 and was responsible for the building of roads and bridges for motor traffic. In 1926 he shared the joy of the inhabitants of Victoria when the town received electricity for the first time.

He came to the islands in August 1927. He succumbed to rheumatic fever not long after and is buried in the Mont Fleuri cemetery.

Under his rule the colony was able to obtain loans for the development of infrastructure mainly roads on Mahe, Praslin and La Digue. Honey inaugurated the World War Memorial in the Mont Fleuri Cemetery.

He was responsible for painting the clock tower silver in 1935. Lethem also introduced the post of Director of Education.

World War II broke out under his rule.  Grimble was a true believer of social reforms, which he felt was imperative for social justice.

The Victoria market is named after him and he also opened the Seychelles College and was behind the creation of the first district councils.

Under his leadership the colony completed several buildings, notably the Queen’s building today known as the Liberty House and the Les Canelles mental hospital today known now as the Wellness Centre.

In 1924, Addis launched the first telephone exchange system at the Queen’s building, allowing communications to reach the town of Victoria.

He opened the Teacher’s Training School in 1959 and in the same year a branch of Barclays Bank was opened in Victoria. Thorpe drowned at Grand Anse Mahe and is buried at the State House cemetery. There is also a Sir John Thorpe Memorial Hall, located adjacent to the St. Paul’s Cathedral.

Under his leadership the American Tracking Station was built in 1963 at La Misere, a project which created job opportunities for Seychellois and  generated significant income for the colony. In 1966 Asquith abolished the death penalty and in the same year started construction on the Rochon dam.

He ruled the colony at a time when people were starting to get involved in politics and enjoyed cordial relations with the Seychelles People’s United Party, (SPUP) and Democratic Party, (DP).

In 1969 he inaugurated the Rochon dam and in 1972 he welcomed Queen Elizabeth for the inauguration of the Seychelles International Airport. In the same year Reef Hotel was opened at Anse Aux Pins.

He was the governor until the colony gained independence on June 29, 1976. Allan appointed the late former President James Richard Mancham as the Prime Minister.