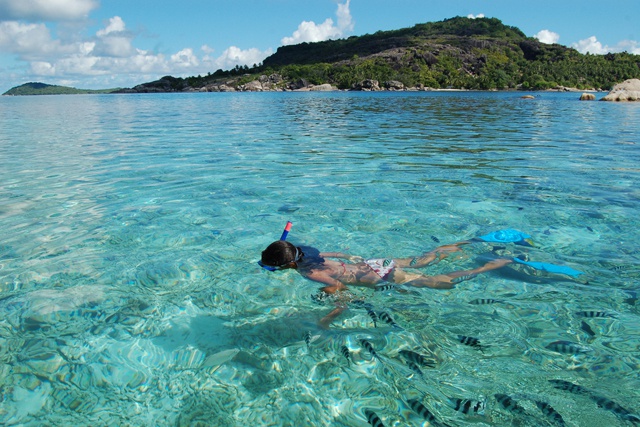 Currently Seychelles protected areas on land is a little over 50 percent while marine parks and other conservation zones constitute just 1 percent of the islands' 1.3 million square kilometres of EEZ (Gerard Larose, STB)

(Seychelles News Agency) - The Seychelles, an archipelago of 115 islands, has a total land area of 455 km² spread over an Exclusive Economic Zone of 1.3 million square km, an EEZ slightly larger than South Africa and about six times the size of the United Kingdom.

Already, half of the Seychelles’ land territory is protected under law as nature reserves.

The Seychelles Ministry of Environment and Energy is now drawing up a Marine Spatial Plan (MSP) which will clearly demarcate areas designated for fishing, recreation, oil exploration and tapping as well as harnessing of renewable energy sources.

Interviewed by SNA, Didier Dogley, Special Advisor to the Minister, said the plan, which should be finalized before two years will be the equivalent of the Land Use Plan and said that a consultative process is ongoing to avoid any conflict between various economic operators.

"For instance, we feel it is important that some areas is set aside expressly for demersal fishing, which should not clash with other activities such as sea-bed mining," he said.

The Seychelles Fishing Boat Owners Association has called it a "good initiative" and hopes that the concerns of the fishing community will be taken into consideration.

"It will be easier for fishermen to abide by the plan when it is implemented, if they have been consulted before it is drawn up," said the association’s Chairman Keith André, who heads about 40 boat owners and some 120 fishermen, most of whom engaged in demersal or bottom fishing, which provides the islanders with their main protein source.

André noted that coastal demersal fishing presently only yields between 2,500 and 3,000 tonnes of fish yearly which is not impacting on fish stocks and the environment.

He added that there is an urgent need for better control of foreign-owned purse seiners, which are bringing in high percentages of by-catch, such as turtles, dolphins and other protected species.

While the percentage of protected areas on land is a little over 50 percent, marine parks and other conservation zones is said to constitute just 1 percent of Seychelles' 1.3 million square kilometres of Exclusive Economic Zone.

The main ones are the marine parks of St Anne, Bay Ternay and Curieuse, as well as the waters around Cousin, Aride, Ile Coco, St Pierre and some outer islands.

Dogley said the MSP will provide for a more rational use of Seychelles' EEZ.

He told SNA that the MSP is being drawn up following Seychelles' ratification of the Convention on Biological Diversity (CBD), which was opened for signature at the Earth Summit in Rio de Janeiro in June 1992 and has three main goals; Conservation of biological diversity, sustainable use of natural resources and fair and equitable sharing of benefits arising from such resources.

Dogley noted that 1 percent of our marine zone as protected areas is way below the minimum 17 percent set by the CBD.

"Presently, residents and visitors alike can fish almost anywhere, besides the few marine parks" he noted
Dogley said it is envisaged that proclamation of more protected areas could be traded in a "debt swap" conditional, upon agreement by members of the Paris Club to write off part of Seychelles' external debt, which presently stands at 65 percent of Gross Domestic Product (GDP).

He added that part of the funds owed to the Paris Club would hence be channeled through a Trust Fund which will fund boats, training and other operational costs of managing marine protected areas.

In April this year, USA's largest environmental organization Nature Conservancy also announced that it will mobilize an $80 million debt-swap for the government of Seychelles, in exchange for its commitment to enhance marine conservation and climate adaptation commitments.

In an online statement released, Nature Conservancy said the project aims to create the Indian Ocean’s second largest marine reserve where some 200,000 square kilometers of Seychelles’ territorial waters would be classified as “replenishment zones” to protect important tuna feeding grounds, and therefore the tuna industry, which is the second pillar of the Seychelles economy.

Seychelles with more than half of its territory protected as nature reserves is not the only island state concerned with the conservation of its terrestrial and marine resources.

New Caledonia, a French overseas territory recently made what has been dubbed a 'historic move' when it announced the decision to create the World’s largest protected area on land or sea covering an area of 1.3 million square kilometres.

The small island nation state in the Pacific Ocean with a population of a little over 250 thousand people is being viewed as the most conservation minded country in the world.