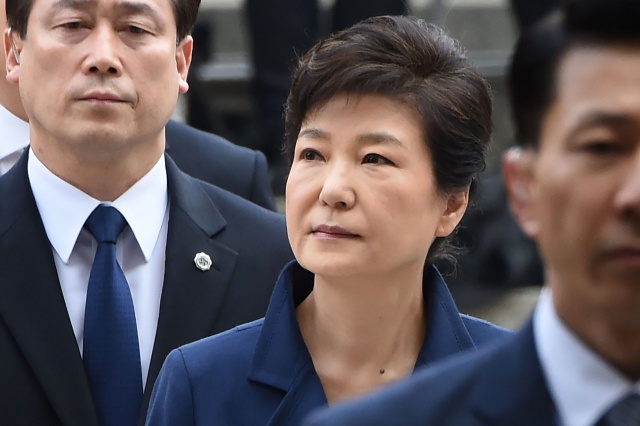 South Korea's ousted president Park Geun-Hye (C) arrives for a hearing to decide whether she should be arrested over the corruption and abuse of power scandal that brought her down, at a court in Seoul on March 30, 2017. Her formal detention and transfer to custody would be a key step in the disgrace of South Korea's first woman president, who secured the largest vote share of any candidate in the democratic era when she was elected in 2012. Park had her removal from office confirmed by the country's top court earlier this month, ending her executive immunity, and her prosecution has been a key demand of the millions of people who took to the streets to protest against her. (YONHAP / AFP)

(AFP) - South Korea's ousted president Park Geun-Hye appeared in court Thursday at a hearing to decide whether she should be arrested over the corruption and abuse of power scandal that brought her down.

Looking grim-faced and pale, Park ignored a barrage of press flashbulbs and did not speak when she arrived at the Seoul Central District Court.

Her formal detention and transfer to custody would be a dramatic step in the disgrace of South Korea's first woman president, and is a key demand of the millions of people who took to the streets to protest against her as the scandal engulfed her leadership last year.

The former president, who was stripped of her immunity when she was dismissed from office by the country's top court earlier this month, is accused of multiple offences including bribery, leaking government information, and abuse of power. Park has denied all charges.

Choi Soon-Sil, Park's secret confidante at the heart of the scandal, is already on trial for forcing top local firms including tech giant Samsung to "donate" nearly $70 million to non-profit foundations which she allegedly used for personal gain.

Prosecutors have submitted around 120,000 pages of documents to the Seoul Central District Court in relation to the charges against Park, and said it would be "counter to the principle of fairness" if she was not arrested.

The 65-year-old was driven away from her home in southern Seoul past hundreds of flag-waving, screaming supporters lining the narrow street.

Some tried to break through police barricades in an effort to stop the passage of her four-car convoy, which was broadcast live on television.

Thursday's hearing was expected to last for several hours, with Park sitting in the centre facing judge Kang Bu-young, 43, with lawyers and prosecutors to either side.

"We are not even halfway through," Yonhap news agency cited Park's attorney as saying when the hearing resumed after lunch.

Afterwards the ex-president was to be removed to a detention centre to await Kang's decision, which was not expected until late into the night -- although he has to make it within 24 hours.

If the warrant is granted, she will be formally taken into custody becoming the third former leader to be arrested over corruption in Asia's fourth-largest economy, where politics and big business have long been closely tied.

Samsung Electronics vice chairman Lee Jae-Yong, who was arrested last month in connection to the scandal, was in court for over seven hours for his hearing, and his detention was approved early the following day.

"The least she can do as the ex-president who damaged national dignity is to admit her criminal acts, bow her head and seek forgiveness," said a spokesman for the main opposition Democratic Party.

An election to choose her successor will be held on May 9. Moon Jae-In, her rival in 2012 and a former Democratic Party leader leads opinion polls by large margins.

Park, daughter of late dictator Park Chung-Hee, secured the largest vote share of any candidate in the democratic era when she was elected in 2012.

But she was impeached by parliament in December, as the scandal combined with mounting economic and social frustrations to trigger huge candlelit demonstrations. The Constitutional Court later upheld the decision.

Last week she underwent a 21-hour interrogation session at the prosecutors' office, having refused repeated requests to be interviewed while in power.

Then, prosecutors addressed her as "Madam President" but Kang will call her the "suspect".

She had been "lost for words" when authorities asked for her arrest, the Chosun Ilbo daily quoted an unidentified pro-Park lawmaker as saying.

Another said she had been having "sleepless nights and skipping meals" since moving out of the presidential palace.

She is also accused of letting her friend, a high school graduate with no title or security clearance, handle a wide range of state affairs including nomination of top officials.

Park is also said to have cracked down on thousands of artists who had voiced criticisms of her or her father's iron-fisted rule from 1961 to 1979.

She has repeatedly apologised for the upset caused by the scandal but not admitted any wrongdoing, blaming Choi for abusing their friendship.