Interview with Seychellois Archbishop Chang-Him: “Make the most of every moment of one’s existence” 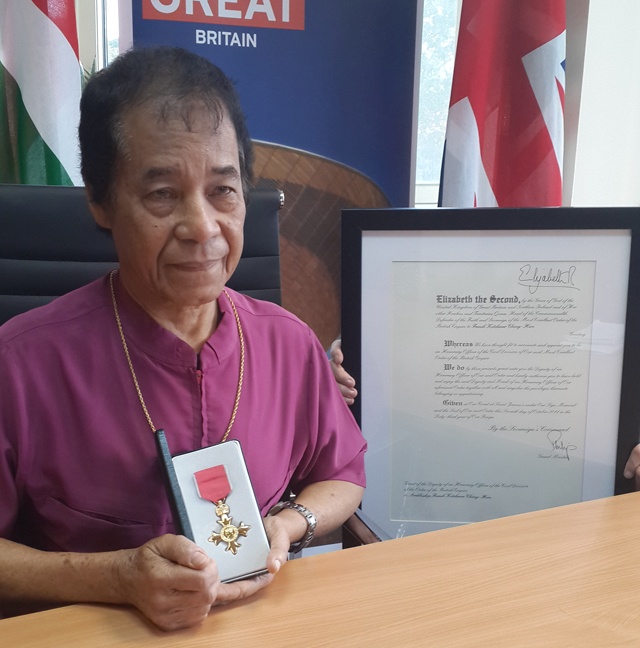 (Seychelles News Agency) - Seychellois Anglican Archbishop Emeritus of the Indian Ocean 78-year-old French Chang-Him says he plans to discharge his pastoral and benevolent duties for as long as he is physically and mentally able to do so.

Born to a father of Chinese origin -- Francis Chang Him – and Seychellois mother -- Amelia Zoe -- French Chang-Him spent his childhood years in the Seychelles' capital Victoria and Bel Ombre in northern Mahé, the Seychelles' main island.

Hailing from a family of 10 siblings, Chang-Him was ordained to priesthood in 1963 and became the first Seychellois Anglican Bishop in 1979.

In spite of officially retiring in 2005, Chang-Him is today still active in Church and as a member of various charitable organizations.

SNA caught up with the Bishop to talk about his vocation, fondest memories and the fact that he shows no sign of slowing down.

SNA: Firstly, talk to us about your vocation. When did you receive the calling to become a priest?

Archbishop Chang-Him: I first felt the call during mass one Sunday morning at the St Luke’s church at Bel Ombre. I was about 15 years old. But even though I felt that this was my vocation, my first job was teaching. I was a primary school teacher at St Paul’s Boys’ School until I left for [theological studies] in the United Kingdom in 1959.

My initial theological training at Lichfield Theological College lasted three years -- 1959 to 1962. But over the years I pursued other studies, as I was given added responsibilities. These include Post Ordination Studies at the St Augustine’s College in Canterbury, England and at the Trinity College at the Toronto University of Canada.

SNA: Tell us a little bit about your first time working in a parish?

Archbishop Chang-Him: My first pastoral posting was in the Parish of Goole, in the Diocese of Sheffield. I started out as a deacon and curate under the guidance of the Vicar of the Parish. After my ordination to the priesthood in June 1963, I was sent to Praslin [Seychelles’ second-most populated island] as priest-in-charge of the whole island, also responsible for the Anglican community on La Digue and Cousine, as well as for the leper settlement on Curieuse Island.

SNA: You eventually became the first Seychellois Anglican bishop -- what are some of your greatest achievements during your tenure?

Archbishop Chang-Him: I was consecrated bishop on July 25, 1979 in St Paul’s Cathedral and I remained bishop until 2004. I give thanks that during my tenure we were able to train and ordain ten Seychellois clergy [including the first woman priest in Seychelles]. We also ordained two expatriate priests who returned to work in their homeland [USA & UK]. We also rebuilt the current St Paul’s Cathedral and built the Trinity House building [as a source of income for the diocese]. There were also the attempt to revive the work of the Anglican Church in Reunion Island, get the history of the diocese written [entitled Launching out in the Deep] and the diocese also produced the first hymn book in French. We also initiated the setting up of the Cancer Concern Association, of which I am an active member and I also helped with the creation of a group called Friends of Prison, among others.

SNA: How do you spend your time nowadays?

Archbishop Chang-Him: Since January 2005 I have the responsibility for pastoral care of the St John’s Church and congregation at Glacis. I am also the chairperson of the Cancer Concern Association, Secretary of the Seychelles Inter-Faith Council (SIFCO), and patron of the group called Friends of Prison. I also lead a weekly bible study and prayer group at the St Paul’s Cathedral. I am also involved in all aspects of pastoral work, counselling especially grief counselling and deliverance ministry.

SNA: How do share your time between doing pastoral work and family?

Archbishop Chang-Him: I try to do justice to both, although I do not always get the proportions right! I need to give more time to my daughters -- now adults -- and to my two granddaughters as well as to other relatives.

SNA: So when do you plan to completely retire?

Archbishop Chang-Him: I retired officially in 2005. With God’s grace I shall continue until such time that I feel that physical or mental strength is telling me I need to step aside. I intend to gradually shed my current responsibilities. But knowing myself, I will always be involved in something or another for as long as I possibly can.

SNA: What are some are your life’s fondest memories?

Archbishop Chang-Him: My childhood years in Victoria and Bel Ombre, wonderful memories of all the continents I have visited. There’s also my marriage to Suzie and the ensuing family life, the early death of Susie and its effects on my daughters Frances and Michelle and myself. The sinking of the Ero [local ferry operating between Mahe and Praslin that sank in 1975] will always stay with me. We were left at sea, threatened by sharks but protected by the dolphins until our rescue by Luc Grandcourt and crew. I will always remember all the blessings I have received from the Almighty God and all those who have travelled with me on life’s journey.

SNA: What would be your message to the younger generation, especially now that we see few or almost no new ordination to the order of priesthood?

Archbishop Chang-Him: Life is a gift from our creator. Give thanks for this life. One recurrent phrase from the Bible is: “before the foundation of the world” that is before the creation of the universe. [Through this] we come to learn that before that time the Almighty had foreseen our arrival into this world…The sooner we start asking these questions: The sooner we start asking these questions: Why am I here? What was I created to do during my life on earth? Where do I go from here? The better it will be. Make the most of every moment of one’s existence. Live each day as if it was the last.

Regarding the call to ordination, it’s the same case for all other callings from God … . This calls for a response. It is the responsibility of individual religious groups or faiths to identify and assist those called to discover their vocation and make provision for their training and specific ministry. We find joy and fulfillment in total surrender to the divine will and love for others.

SNA: What is your opinion on the Truth, Reconciliation and National Unity committee especially since you lost your brother in mysterious circumstances?

Archbishop Chang-Him: In respect of the quote relating to the Truth & Reconciliation process, I still advocate forgiveness through the process of restorative rather than retributive justice, that is seeking to bring together the victim and the aggressor  to address whatever happened, show remorse where necessary, forgive, and be reconciled, instead of focusing on retribution or punishment. Let me end by saying the words of Jesus to his disciples after His resurrection:  “Peace be with you”. After saying this, Jesus showed them his hands and his side.  (John 20:19 – 20).

Archbishop Chang-Him, who attended theological college in England, was ordained deacon inthe UK in 1962. He was ordained to priesthood in 1963 at the Anglican’s St Paul’s cathedral in the Seychelles capital of Victoria.

He also served as the Bishop of the Anglican diocese of Seychelles from 1979 until his resignation in 2004. He held the position of Archbishop of the Indian Ocean from 1984 to 1995.

Archbishop Chang-Him who continues to lead services at various parishes across the country was conferred the title of Archbishop Emeritus by the Indian Ocean Province of the Anglican Church in 2014.

He is today also involved in various charitable organisations including the Cancer Concern Association, Friends of Prison and he is also a member of the Inter-faith Committee which bring together the leaders of different denominations in the country.

He also authored a book “The Seychellois – in search of an identity.”

Archbishop Chang-Him -- a father to twin daughters -- lost his wife who died of cancer in 1996 and also lost his brother Davidson Chang-Him who was shot during the coup of June 5, 1977 which saw France Albert Rene remove James Mancham from power.

In December 2014, Archbishop Chang-Him was designated an Officer of the Most Excellent Order of the British Empire (OBE) by Her Majesty Queen Elizabeth II for his services to reconciliation, human rights, charity and democratic values, and also for his invaluable service to British nationals in Seychelles, past and present.