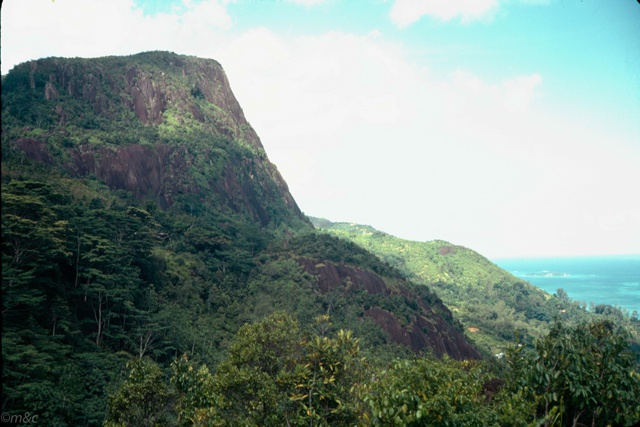 (Seychelles News Agency) - The highest mountain in the Seychelles archipelago, Morne Seychellois, stands at 905 metres tall, towering in splendour above the main island of Mahé. Its thick, mysterious forests and glossy black granite mountain façades give a good indication of what an uninhabited and wild Mahé would have looked like before the first settlers arrived in the late 18th century.

The mountain itself is enclosed in a vast national park that covers an impressive 3,045 hectares, equivalent to 20 percent of the otherwise highly-developed island, and this feat is thanks to the government of Seychelles demarcating the area as a protected area 35 years ago, along with another terrestrial park on the second most populated Seychelles island of Praslin and three marine reserves, located at Baie Ternay and Port Launay, both on the island of Mahé, and one surrounding Curieuse Island.

All of these protected areas, each with its own unique features and attractions, offer a wide diversity of tropical fauna and flora which is enjoyed by thousands of visitors each year.

Yesterday, the Seychelles National Parks Authority (SNPA) held a ceremony and exhibition to mark the anniversary of the declaration of these protected areas, a milestone which has gone a long way towards conserving the exceptional biodiversity of the Seychelles, both on land and in the ocean.

According to an article published today in daily newspaper ‘Seychelles Nation’, during the exhibition, which was held at Independence House in the island’s capital city of Victoria, the Seychelles Minister for Environment and Energy, Professor Rolph Payet, listed the many advantages of having these protected areas, and described the world’s islands as living laboratories.

“Contributing to only 5% of the Earth’s landmass, they provide critical habitats to more than 20% of all birds, reptiles and plant species. Islands also harbour 50% of the world’s known marine biodiversity and consist of almost half of the 34 global conservation hotspots,” he said.

The winners of a photography competition to coincide with the anniversary celebrations were announced, with Vidura Fonseka winning in the ‘Landscape’ category, Bettina Hortence clinching first place in the ‘Flora and Fauna’ category and Lymiah Bibi won in the ‘Human Activity’ section.

The 35 years commemoration since the Morne Seychellois along with another terrestrial park on the island of Praslin and three marine reserves, located at Baie Ternay and Port Launay, on Mahé, and one surrounding Curieuse Island were designated as national parks comes now that the archipelago is intensifying efforts to increase the percentage of marine zones designated as protected areas.

The Seychelles Ministry of Environment and Energy is drawing up a Marine Spatial Plan (MSP) which will clearly demarcate areas designated for fishing, recreation, oil exploration and tapping as well as harnessing of renewable energy sources.

Seychelles, with over 50 percent of its land territory protected is the second most conservation- minded country in the world after New Caledonia.

The small island nation, a French territory in the Pacific Ocean with a population of a little over 250 thousand people recently announced the decision to create the World’s largest protected area on land or sea covering an area of 1.3 million square kilometres.