Direct from Dusseldorf: Passengers on new flight from Germany land in Seychelles 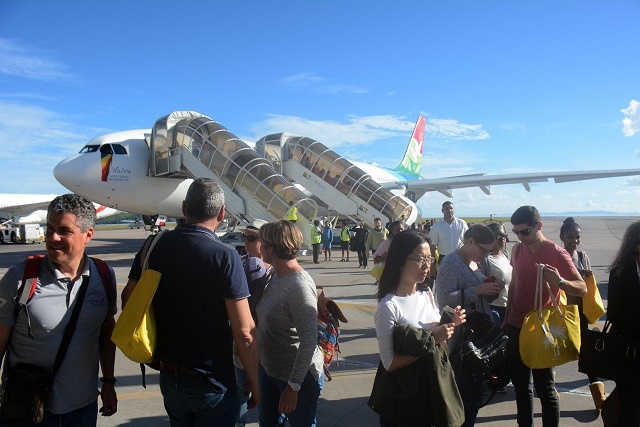 (Seychelles News Agency) - The first passengers from Düsseldorf, Germany to travel on Air Seychelles direct to the island nation arrived on Saturday.

The national airline's new Airbus A330 -- named ‘Vallée de Mai’ -- touched down around 8 a.m. and was welcomed with the customary water canon salute. Over 200 passengers were onboard the inaugural flight, a large number of whom were Seychellois returning from Germany.

The chief executive of Air Seychelles, Roy Kinnear said: “I am absolutely confident, now more than ever, that Düsseldorf will be everything that we expected and even more.”

Air Seychelles launched its direct, twice-weekly flights with its new Airbus to Düsseldorf in Germany on Thursday.

Kinnear said the market has all the potential such as size and quality that Air Seychelles is looking for and added that the flight is an excellent addition to the airline's network.

“Particularly pleasing was the number of Seychellois passengers on the plane. This new market adds variety for the Seychellois citizens,” added Kinnear.

The chief executive expressed his surprise at the number of media representatives he met with on the runway in Düsseldorf on Friday night.

“We should never underestimate the excitement that the word Seychelles creates around the world,” he said.

On the inaugural flight was the chief executive of the Seychelles Tourism Board, (STB) Sherin Francis ,who said that, “Getting onboard in Germany is like your holiday starts in Germany."

Francis explained that the Seychelles’ story with Düsseldorf started six years ago, during the first edition of the “Carnaval Internationale de Victoria”, and that the new flight to the German city was just the start of future collaborations between the two countries.

According to the figures from the National Bureau of Statistics on visitor arrivals to Seychelles for last month, Germany is the leading market with 10,490 visitors, with France close behind at 10,326.

Seychelles, an archipelago in the western Indian Ocean, relies largely on tourism as the top economic contributor.