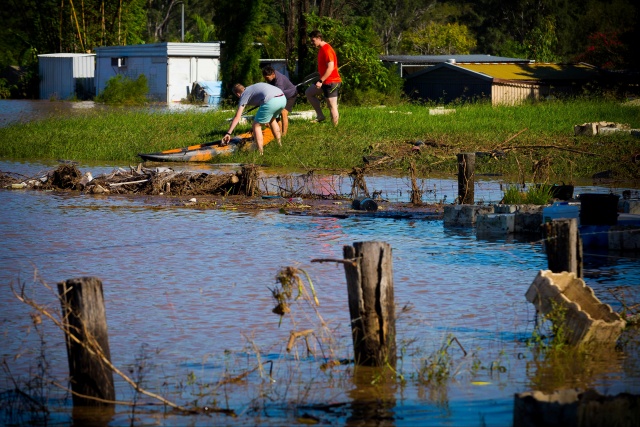 Residents handle a kyack as floodwaters caused by Cyclone Debbie recede in the town of Beenleigh on April 2, 2017. Rising floods continued to plague parts of eastern Australia as emergency workers battled to restore water and electricity in cyclone-hit areas on April 2, with the recovery efforts expected to last several months. (Patrick HAMILTON / AFP)

(AFP) - A massive clean-up was in full swing Monday as floodwaters receded across parts of Australia devastated by a cyclone, with residents and business owners returning to thick mud, piles of debris and ruined property.

At least two people were killed and three remain missing after torrential rain and powerful winds pummelled large swathes of Queensland and New South Wales states over the past week, forcing the evacuation of tens of thousands of people and causing huge damage.

While the worst of the weather is over, with Cyclone Debbie moving out to sea on Saturday, the daunting task facing those affected is just beginning.

New South Wales State Emergency Services Deputy Commissioner Mark Morrow said it would be a long haul for towns such as Lismore and Murwillumbah that were inundated by floods.

"The mud, combination of chemicals, raw sewage, paint which gets into everything. Two to three metres above floor level. Nothing escaped this. It was a very, very big flood," he said.

Many of those who fled the area have begun heading back, with Morrow warning "it won't be pleasant."

"It will be a lot of work for those people as they return today," he said.

Military and emergency personnel continued to work to restore essential services such as water and electricity in affected towns, where hundreds of homes have been deemed uninhabitable.

The Insurance Council of Australia has estimated the damage bill could reach Aus$1 billion (US$770 million), as people braved mud-caked streets to begin clearing out homes and shops, with mountains of ruined possessions piled on pavements.

New South Wales Premier Gladys Berejiklian, speaking in flood-ravaged Tweed Heads, said the government would do all it could to help those who have lost everything.

"It is not just about the few days when the floods hit and the water recedes. This is when the work starts. We know that," she said.

The cyclone dumped more than a metre of rain on parts of Queensland and the huge volume of water is still slowly spilling down river systems, with Rockhampton next in the firing line.

It was feared the town would be hit later this week by its worst flooding in more than 60 years, but authorities Monday said the estimated peak had now been revised down, although major flood warnings still exist.

"We do want to stress to the people of Rockhampton that you still need to make your flood preparations," said Queensland Premier Annastacia Palaszczuk.

"We are not out of the woods yet, there is still a long way to go," she added, stressing that 300 schools in the state had been damaged and needed repairs.

One of the worst hit areas was Airlie Beach and the Whitsunday islands, key drawcards for foreign tourists.

Many resorts face months of repairs and rebuilding, but despite this tour boats mostly survived and some are already back in business.

"I've got butterflies being back on the water," tour operator Asher Telford told the Australian Broadcasting Corporation as he set sail with 18 undeterred holiday-makers on a two-night cruise.

"Although many communities have been affected by the cyclone and floods, Queensland is still open for business," she said.