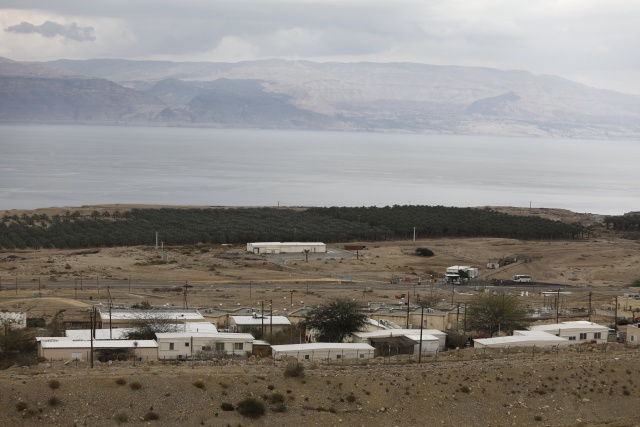 A picture taken on April 2, 2017 show the Israeli settlement of Ovnat located on the shore of the Dead Sea in the Judaean desert in the Israeli-occupied West Bank. (MENAHEM KAHANA / AFP)

(AFP) - Three months after a landmark UN resolution condemning Israeli settlements, the measure has changed little on the ground and some analysts question whether it ever will.

Security Council Resolution 2334, passed in December, did little to halt settlement building, with a raft of new projects announced by Israeli officials in the weeks that followed.

At the same time, it is among the measures US President Donald Trump's administration has cited in its argument that Israel is being unfairly targeted at the UN.

Some diplomats see the resolution as increasingly irrelevant, even counterproductive.

It was passed in former president Barack Obama's final days in office after the United States agreed not to veto it, giving the green light for the first Security Council resolution condemning settlements since 1979.

Trump had called for it to be vetoed.

The Israeli government reacted fiercely, withdrawing ambassadors from countries that sponsored it and threatening sanctions.

Israel has also announced plans for more than 5,500 new homes in the occupied West Bank and east Jerusalem since January.

Last week, it announced the first new government-sanctioned settlement in more than 25 years.

"The days of Israel bashing are over," she recently told a pro-Israel lobby.

There have been growing warnings that Israeli settlement expansion is gradually eroding hopes of a two-state solution, the basis of years of negotiations.

Settlements are seen as illegal under international law and major stumbling blocks to peace as they are built on land the Palestinians see as part of their future state.

While Trump has vowed unstinting support for Israel, he too has called on the country to "hold back on settlements for a little bit" while Washington considers ways to restart Israeli-Palestinian talks.

Still, Prime Minister Benjamin Netanyahu's government, seen as the most right-wing in Israeli history, has negotiated with the White House on how to move forward with settlement building.

Robert Serry, until 2015 UN special coordinator for the Middle East peace process, said the resolution was effectively stillborn because it came so late in Obama's term.

"I support the resolution's content," he told AFP. "But it is an example of what can happen if something happens too late."

Had a similar resolution not been vetoed by the Obama administration in 2011, it could have built pressure on Israel, he said.

"But what we have seen now is the resolution has become the focus of all kinds of activities in Israel and the United States claiming it is another example of Israel bashing."

It voted for the resolution but later refused to support a statement at a Middle East peace conference in Paris in January that Israel opposed.

There was speculation that London was in part concerned with upsetting the incoming Trump administration.

"If 2334 symbolised some sort of international consensus, what happened in Paris was exactly the opposite," said Nimrod Goren, head of the Israeli Institute for Regional Foreign Policies.

"Instead of the resolution being the starting point for significant action or agreement, it was stepped back on."

Alan Baker, a former senior Israeli diplomat and negotiator, said Trump's and Israel's actions had made the resolution less relevant.

"Obama was at the end of his term and felt he could lash out," he said. "Now (critics) have to pull themselves back and limit their bashing of Israel."

Serry pointed out that new UN Secretary General Antonio Guterres did not present the report, and questioned whether it was an attempt to distance himself from the resolution.

Trump has proposed cuts in US funding to the UN, which could leave Guterres, who only took office in January, in a bind.

Serry said rows over Israel and the Palestinians threatened to damage the UN's work elsewhere.

"This can impair on the very functions of the United Nations itself."

One clause in the resolution calls on countries to differentiate between Israel and its settlements.

Mladenov's first report says only that there were "no developments" related to this matter.

"At the most basic level I would expect Mladenov to name and shame -- to call out those member states who are not complying with 2334," he said.

A UN official speaking on condition of anonymity said it was up to countries to enforce implementation.

Not everyone has been critical, and some believe the resolution being passed was an achievement in itself.

"We all knew there wouldn't be any real world consequences. It was more about making a point," one European diplomat said.

But Thrall said that for now, little action could be expected.