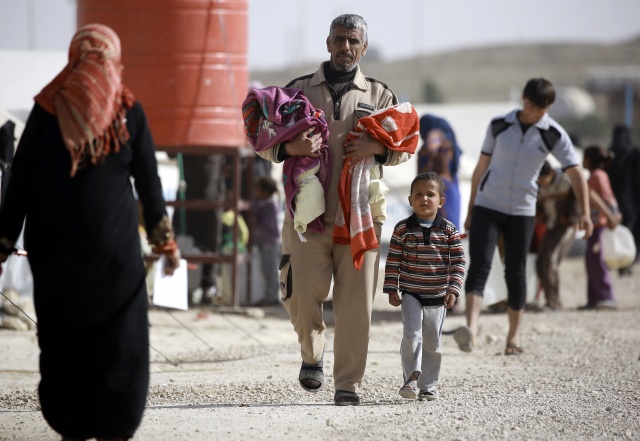 An Iraqi refugee, who fled from Mosul, carries his children as he walks around in a camp in al-Hol, located some 14 kilometers from the Iraqi border in Syria’s northeastern Hassakeh province, on March 13, 2017.(DELIL SOULEIMAN / AFP)

(AFP) - The European Union and the UN host a two-day conference starting Tuesday on Syria's future, with Russian-backed President Bashar al-Assad as firmly in place as ever despite efforts to oust him.

EU foreign affairs chief Federica Mogherini has billed the gathering in Brussels as a follow-up to a donors' conference last year in London, which raised about $11 billion (10 billion euros) for humanitarian aid programmes in the devastated country.

But the meeting is likely to be overshadowed by the Trump administration's announcement last week that it would no longer focus on Assad's removal, concentrating instead on the wider war against terrorism, including the Islamic State group.

The United States had previously stuck by a UN-backed peace plan that would see Assad "transition" from office while an interim government was formed, but Washington appeared to back away from that last week.

An EU diplomatic source said the issue was likely to "be actively discussed on the sidelines of the conference".

The EU expects UN chief Antonio Guterres to attend along with Staffan de Mistura, his special envoy who is mediating the Syria peace talks.

De Mistura reported "incremental progress" at the latest talks on Friday in Geneva and said he expected to announce a date for the next round this week.

Turkey's attendance at the conference is much anticipated since it is home to the largest number of Syrian refugees, at around 2.5 million, and a key regional player pressing for Assad's exit.

But Mogherini said Monday that the Turkish prime minister had not replied to the invitation, even though his counterparts in Jordan and Lebanon are to attend.

The United States and Russia, meanwhile, are expected to be represented by junior officials or diplomats, not ministers.

The 28-nation European Union, along with Germany, Kuwait, Norway, Qatar, Britain and the United Nations, will co-chair the "Brussels Conference on Supporting the Future of Syria and the Region".

It begins Tuesday with a series of workshops, followed by a formal session on Wednesday to review progress on the London pledges and see what additional measures might be taken.

The UN Food and Agriculture Organization said Monday that Syria would need an initial $10.7 billion to $17.1 billion to revive agricultural production, depending on how the conflict plays out.

It estimated that the war has caused more than $16 billion in lost crop and livestock production and farming assets.

Since 2011 the FAO has been providing assistance for some 2.4 million Syrians in rural areas and on the outskirts of cities including Aleppo, Homs and Damascus.

The conference participants will "also consider the prospects for post-agreement assistance once a genuinely inclusive political transition is firmly under way," the European Council of member countries says on its website.

Mogherini said the Brussels conference would muster aid efforts while supporting the search for a political settlement to a war which has cost some 320,000 lives.

The EU wants to work with regional players and the international community "to support this political process. We are there to help the Syrians", she said.

"We have never bombed Syria," she noted, making the implicit comparison with the pro- and anti-Assad powers.

As for Assad's future, Mogherini said she believed "it would be impossible" to return to the status quo.

Announcing the conference last month, Mogherini said the EU could help in security, demining and monitoring of an eventual ceasefire as well as restoring essential services such as water, health and education.

The EU estimates that about 13.5 million Syrians need humanitarian assistance inside the country, while another five million have fled, most to Turkey and other neighbouring countries.