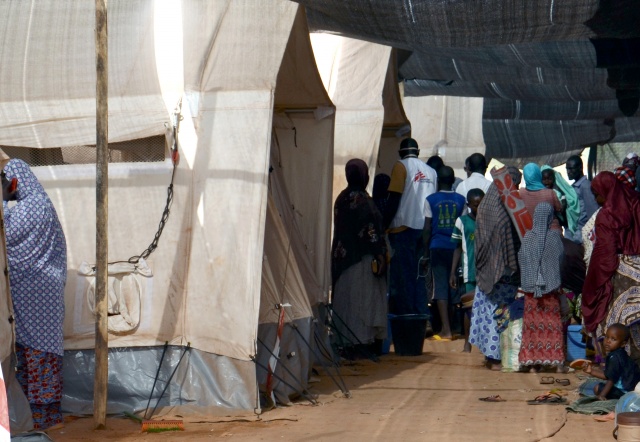 People gather at the health center of Lazaret, near Niamey, on April 23, 2015, where are treated patients suffering from meningitis. The death toll in a meningitis epidemic that broke out in January in Niger has reached 129, the health minister said on April 24, 2015. Niger, one of the world's poorest countries, is frequently prone to meningitis epidemics because of its position in the "meningitis belt" that stretches from Senegal in the west to Ethiopia in the east, according to the World Health Organization. (AFP PHOTO/ Boureima Hama)

(AFP) - Health workers in Nigeria on Wednesday began a mass vaccination programme to try to halt a mass outbreak of meningitis that has killed nearly 340 people since late last year.

The Nigeria Centre for Disease Control (NCDC) said there had been 2,997 suspected cases of the disease in 16 states as of April 3, with 336 deaths.

"Right now, vaccinators are in the field in Zamfara state administering doses of vaccine to contain the spread of the disease," Lawal Bakare, from the agency, told AFP.

Zamfara, in northwest Nigeria, and the neighbouring states of Sokoto, Katsina, Kebbi and Niger have been hit hardest by the disease which broke out in November.

Most of the dead are children aged five to 14.

Bakare said 500,000 doses of vaccines would be distributed in the worst-hit states and an additional 823,970 doses were expected to arrive from Britain for use elsewhere.

In Zamfara alone, some three million doses are required.

Health officials said the type of meningitis C strain responsible for the latest outbreak was not common in Nigeria and there was a "limited stock" of vaccine worldwide.

But health officials said they were confident the vaccination campaign would reduce the number of cases.

Meningitis is caused by different types of bacteria, six of which can cause epidemics.

It is transmitted between people through coughs and sneezes, and facilitated by cramped living conditions and close contact.

The illness causes acute inflammation of the outer layers of the brain and spinal cord, with the most common symptoms being fever, headache and neck stiffness.

Nigeria lies in the so-called "meningitis belt" of sub-Saharan Africa, stretching from Senegal in the west to Ethiopia in the east, where outbreaks of the disease are a regular occurrence.

The country and neighbouring Niger were both badly hit by meningitis outbreaks in 2015, when over 13,700 people were infected in six months, with more than 1,100 deaths.