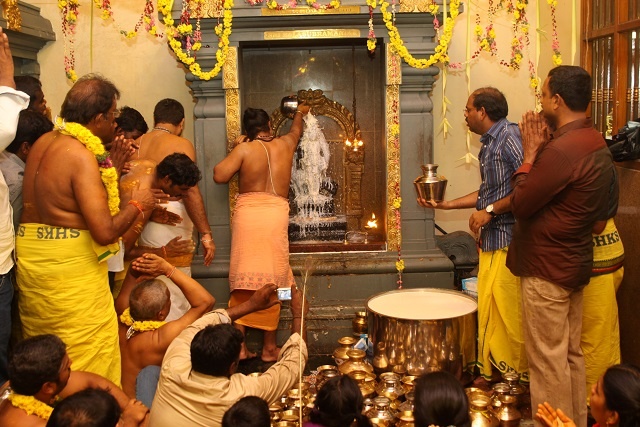 Inside the temple, devotees anoint the statue of the Lord Muruga with milk and pray for blessings during Thaipoosam Kavadi Festival (Joe Laurence, Seychelles News Agency)

(Seychelles News Agency) - Seychelles is a melting pot of cultures. The different races which made up the island nation not only brought with them their way of life and cuisine but also their faith and beliefs. This week’s Buzz features the different spiritual landmarks of the Seychelles, relating to the most practiced faiths of the islands.

Standing out against its backdrop of Trois Freres Mountain, this striking Hindu temple is the only one to be found in the Seychelles and is a relatively new addition to the capital city of Victoria. The temple was constructed in 1992. Named after the Hindu god of both prosperity and safety, Lord Vinayagar, the temple features a prominent and very colourful ornate tower.

St. Paul’s is both the Cathedral of the Diocese and the Anglican parish church of Victoria. The original church, dedicated to St. Paul the Apostle and standing on the site of the present Cathedral, was consecrated on 14 May, 1859 by the first Bishop of Mauritius, Vincent William Ryan.

3. The Catholic Cathedral of Immaculate Conception

The Cathedral is the Mother Church of the Catholic Diocese in Seychelles. Constructed on the site where Father Leon of Avanchers built the first vault in March 1851 that was devoted to the virgin of the immaculate conception, the cathedral is one of the first churches in Seychelles. The first and only Seychellois Bishop, Felix Paul, who passed away on the November 21, 2001, and two catholic nuns who died in the 1862 lavalas (landslide) are buried inside the cathedral in a tomb built in the flooring.

The Bahá’í Faith was first established in Seychelles in 1955. Though the faith has regional centres on Mahe, Praslin and La Digue, its main one is located at the central Mahe district of Bel Air. The new centre -- the Baha’i National Haziratu’l-Quds -- was opened in November 2003.

5. The Pentecostal Church of Seychelles

The Pentecostal Assembly started in 1979. In 1983 the congregation moved into an existing building at riverside on the outskirts of Victoria. The new Pentecostal church was opened in 1991.

6. The Islamic Society of Seychelles

The first Islamic mosque opened in Seychelles in September 1982. It was pulled down and in January 2012 construction of a new mosque started. The Mohammed Bin- Khalifa Al- Nahyan Mosque was opened in August of the same year.

7. The Seven Day Adventist of Seychelles

The Seven Day Adventist Mission was initiated in Seychelles in 1930 by Pastor Daniel Ignace, a Mauritian who opened a branch here. The church is still based at St. Louis.

The Jehovah Kingdom's Hall, the place of worship for the Jehovah Witness, is located at Mt. Fleuri. The congregation has been using the hall since it was opened in 1994. The group was established here by Norman Gardner in 1963.

Opened in 1902 by the Chinese Community of Seychelles Khun Sock Fooy Qoon. The old Pagoda was demolished in 2014 and a new one is being built. The pagoda is the home of the “Guandi”, the “Chinese God” that Chinese elders worship and is located at Benezet Street in the centre of the capital, Victoria.