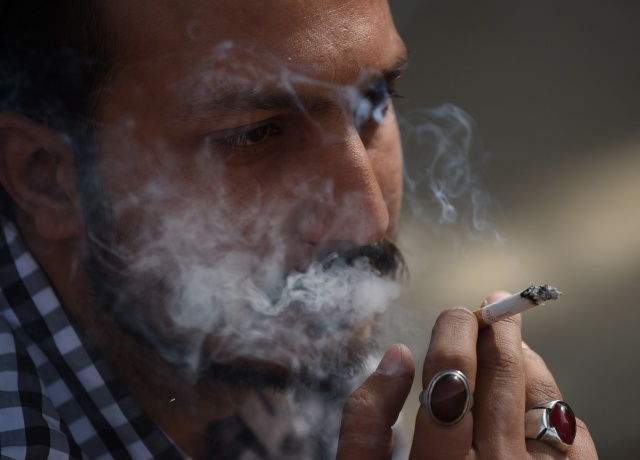 A Pakistani man smokes a cigarette in Karachi on January 31, 2017.
Smoking cost the world economy more than 1.4 trillion dollars (1.3 trillion euros) in 2012, and sucked up a twentieth of health care spending, a study said on January 31. (RIZWAN TABASSUM / AFP)

(AFP) - The percentage of men and women who use tobacco every day has dropped in most nations since 1990, but the total number of smokers and tobacco-related deaths has increased, a consortium of researchers reported Thursday.

Mortality could rise even further as major tobacco companies aggressively target new markets, especially in the developing world, they warned in a report, published in the medical journal The Lancet.

One in four men and one in 20 women smoked daily in 2015, according to the Global Burden of Diseases report, compiled by hundreds of scientists.

That was a significant drop compared to 25 years earlier, when one in three men, and one in 12 women, lit up every day.

But the number of deaths attributed to tobacco -- which topped 6.4 million in 2015 -- went up by 4.7 percent over the same period due to the expanding world population, the report found.

Smoking causes one in ten deaths worldwide, half of them in just four countries: China, India, the United States and Russia.

Together with Indonesia, Bangladesh, the Philippines, Japan, Brazil, and Germany, they account for fully two-thirds of global tobacco use.

"Smoking remains the second largest risk factor for early death and disability" after high blood pressure, said senior author Emmanuela Gakidou from the Institute for Health Metrics and Evaluation at the University of Washington, in the US northwest.

Some countries have seen sharp reductions in smoking driven by some combination of higher taxes, education campaigns, package warnings and programmes to help people kick the nicotine habit.

Brazil was among the leaders over the 25-year period examined, with the percentage of daily smokers dropping from 29 to 12 percent among men, and from 19 to eight percent among women.

In Russia -- where tobacco control policies were not put into place until 2014 -- the percentage of women who smoke climbed by more than four percent over the same period.

Similar trends are emerging in much of Africa, the authors cautioned.

The World Health Organization (WHO) projects that the number of men and women smoking in sub-Saharan Africa will go up 50 percent by 2025, compared to 2010 levels.

"Future mortality in low- and middle-income countries is likely to be huge," John Britton from the University of Nottingham's UK Centre for Tobacco and Alcohol Studies wrote in a comment, also in The Lancet.

Responsibility for the global tobacco epidemic lies mainly with a handful of multinational based in rich countries, he said.

"The modern tobacco industry profits from enslaving children and young people in poor countries into a lifelong addiction, and ultimately taking their lives for profit," he told AFP.

The global response -- including a 180-nation "tobacco control" treaty inked in 2005 -- has focused mostly on users and not the supply, he added.

The WHO has noted that "tobacco is the only legal drug that kills many of its users when used exactly as intended by the manufacturers."

It is estimated that half of daily smokers will die prematurely due to their tobacco habit unless they quit.