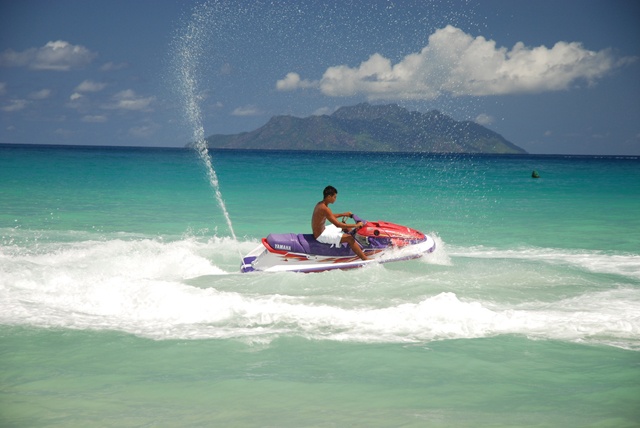 File photo: The SMSA in collaboration with other relevant authorities, the maritime police and the Seychelles coast guards already have a number of precautionary measures in place including increased surveillance at Beau Vallon and Anse Royale beaches (Gerard Larose, Seychelles Tourism Board)

(Seychelles News Agency) - Tougher measures are being considered by the Seychelles Maritime Safety Administration to address irresponsible use of recreational watercrafts, including jet skis.

The authority is working to amend the island nation’s Beach Control Act that regulates the use of these motorized equipment.

In an interview with SNA, the Director General of the Seychelles Maritime Safety Administration (SMSA), Captain Joachim Valmont, said jet ski users caught breaking the law will be fined or have their vessels confiscated.

“The Beach Control Act makes reference to skis that are attached to speed boats. It does not address the use of jet skis. Hence, we have found it necessary to amend our law to reflect today's reality,” said Valmont.

The 115 islands of the Seychelles in the western Indian Ocean are surrounded by unending turquoise ocean. Water-based activities including watersports are therefore quite popular.

In recent years, the maritime authorities have been receiving increasing complaints from the general public with regards to reckless use of jet skis. Many individuals have taken to the social media – Facebook – to question their safety while enjoying a day at the beach.

Valmont said that the most affected beaches on the main island, Mahe are the Beau Vallon beach located in the north and Anse Royale, in the south. The use of these two beaches are influenced by the island nation’s two monsoons which are seasonal shift in wind direction – southeast from May to October and northwest December to March.

“During the Southeast Monsoon, waters in Beau Vallon are calm and these activities are concentrated in that area. On the other hand during Northwest Monsoon when the sea at Beau Vallon is choppy, we see that the activity shifts to Anse Royale,” Valmont explained to SNA.

The SMSA in collaboration with other relevant authorities -- the maritime police and the Seychelles coast guards -- already have a number of precautionary measures in place including increased surveillance at the two beaches, as well demarcation at sea using buoys to indicate swimming areas and designated boating channels.

A speed limit of five knots is also applicable within the boating channels, which are used by vessels to pick up passengers from the seashore or removing their vessels from the sea.

Valmont has however highlighted that there are also cases of the public including tourists putting their lives at risk by swimming within areas designated for jet skis. The SMSA says it counts on the support of tourism police officers stationed at the beach to monitor such situations, but feels there is a need to address the situation through the media.

Aside of the Beach Control Act, the SMSA is reviewing several other maritime related laws and policies, which will also cater for the mandatory registration of all vessels by watercraft owners.

Valmont said: “The aim is to create a database of the number and type of boats in our waters, at the same time ensuring safety at sea.”

Operators of motorized and non-motorized watersport businesses will also be registered and issued with a license. They will also bear the responsibility of training people coming to hire their leisure watercrafts.

The SMSA will also be introducing an exam to assess the ability and knowledge of jet skis and other motorized water vessels to manoeuver these equipment.

Valmont said that “the president has announced that the revised policies and laws should be ready by May.”

The Seychelles Maritime Safety Administration is also going through the process of becoming an autonomous authority – independent of the tourism department.

“SMSA would also like to be the authority that deals with hire crafts which is currently being administrated by the Seychelles Licensing Authority. We want to go even further to run surveys on fishing boats to test their seaworthiness,” said Valmont.