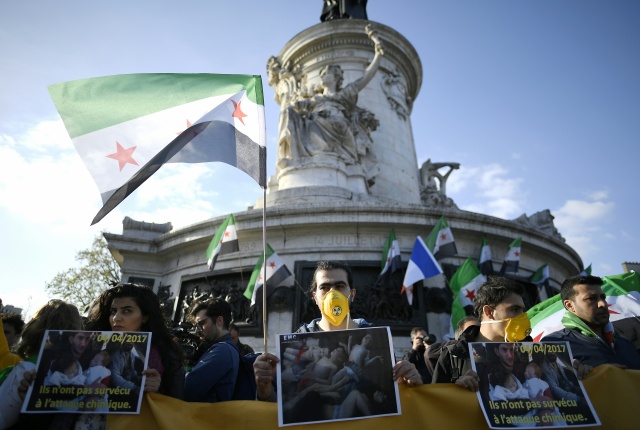 Protesters hold pictures and Syria's former independence flags (which have been adopted by the rebels forces fighting against Syrian pro-government forces in Syria) during a demonstration to protest against chemical attacks in Syria on April 6, 2017 on the Place de la Republique, in Paris, two days after a suspected chemical attack in the northwestern province of Idlib. An air strike on rebel-held Khan Sheikhun in Idlib's province on April 4, 2017 left scores of civilians dead from a suspected chemical weapons attack. At least 86 people -- among them 27 children -- were killed, with results from post-mortems performed on victims pointing to possible exposure to sarin, according to Turkish health officials.(Lionel BONAVENTURE / AFP)

(AFP) - The UN Security Council failed Thursday to reach agreement on demands for a thorough investigation of the suspected chemical attack in Syria, as the United States launched a barrage of missiles against a Syrian airfield.

During a closed-door meeting, the top UN body discussed three separate draft resolutions on the inquiry, but there was no vote on any of the texts.

The disarray at the United Nations came as US President Donald Trump ordered a military strike against Syria, in retaliation for the apparent chemical weapons attack the US blames on President Bashar al-Assad.

Russia's Ambassador Vladimir Safronkov had warned the United States there could be "negative consequences" if Washington took military action in Syria.

"All responsibility if military action occurs will be on the shoulders of those who initiated such a doubtful tragic enterprise," Safronkov said.

"We have to think about the negative consequences."

"Look at Iraq, look at Libya," he said referring to Western interventions in those countries that unleashed years of chaos.

Britain, France and the United States had pushed for a vote on their proposed measure, but decided to hold off during the meeting. Diplomats said a vote now was more likely on Friday.

Russia has rejected the Western-backed resolution as "categorically unacceptable," suggesting that it could veto the measure.

It has put forward a rival draft that does not include specific demands for cooperation from its ally, the Syrian government.

Seeking to avert a clash between Russia and the West, 10 Security Council countries circulated a compromise resolution, but the text drew a cool response from the United States.

A council diplomat said the United States was showing "no flexibility."

At least 86 people, including 27 children, died in the suspected attack in Khan Sheikhun. Results from post-mortems performed on victims point to exposure to the deadly sarin nerve agent, according to Turkish health officials.

The Western-backed draft resolution demands that the Syrian government provide information to investigators from the Organization for the Prohibition of Chemical Weapons (OPCW) about its military operations on the day of the strike.

The text would press Syria to provide flight plans, flight logs from April 4 and hand over the names of commanders of helicopter squadrons.

The compromise text would drop demands that Syria hand over that information, replacing them with language from a 2013 resolution urging cooperation on chemical weapons investigations, according to the draft seen by AFP.

Russia's text calls for an investigation but requests that the council approve the makeup of the OPCW team dispatched to Idlib.

Britain, France and the United States blame President Bashar al-Assad's forces for the attack that they have described as a war crime, but the Syrian army has denied any involvement.

Russian President Vladimir Putin said it was unacceptable to make "unfounded accusations" over the "incident with chemical weapons" in Syria.

Britain, France and the United States are permanent council members along with China and Russia.

"There are efforts to find a way forward that might be a compromise," Swedish Ambassador Olof Skoog told reporters.

"We are going to try to make sure we have a good discussion before there are any votes."

Chinese Ambassador Liu Jieyi said he hoped the compromise text could win support. "We certainly hope so, China certainly hopes so," said Liu after the meeting.

France earlier warned Russia against resorting to its veto power to block the Western-backed measure at the Security Council.

"That would be a terrible responsibility in front of history," French Ambassador Francois Delattre told reporters.

Russia has used its veto power seven times to block UN action that would put pressure on its ally Syria.