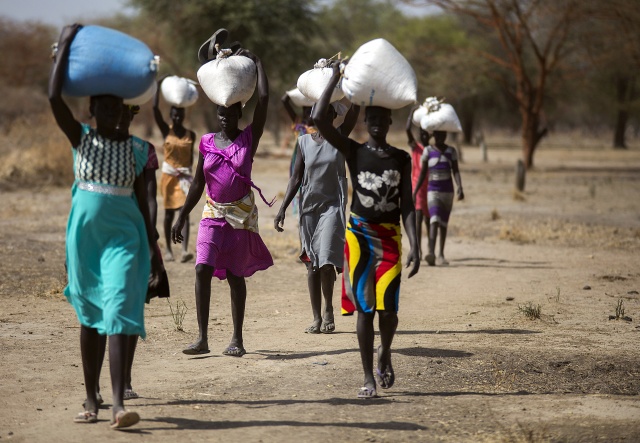 Women carry food in gunny bags after visiting an aid distribution centre in Ngop in South Sudan's Unity State on March 10, 2017. The Norwegian Refugee Council (NRC) distributed food (maize, lentils, oil and corn soya blend) for more than 7,100 people in Ngop. South Sudan, the world's youngest nation formed after splitting from the north in 2011, has declared famine in parts of Unity State, saying 100,000 people face starvation and another million are on the brink of famine. Aid groups have slammed a "man-made" famine caused by ongoing fighting in the country where civil war has forced people to flee, disrupted agriculture, sent prices soaring, and seen aid agencies blocked from accessing some of the worst-hit areas. (ALBERT GONZALEZ FARRAN / AFP)

(AFP) - Fighting in the South Sudan town of Pajok sent over 6,000 people fleeing this week, with refugees recounting the slaughter of civilians by government forces, the UN refugee agency said Friday.

Fighting between government forces and rebels erupted on Monday in the town of Pajok in the country's southern Equatoria region, a previously peaceful part of the country that has seen a surge in conflict in recent months.

According to a statement from the UNHCR over 6,000 people have fled into the northern Ugandan district of Lamwo since the attack while many others were hiding in the bush trying to find their way to safety in Uganda as main roads were blocked by armed groups.

"People fleeing the recent incident claimed that the town came under an indiscriminate attack by the South Sudan armed forces," the statement said.

"Refugees told the UNHCR team on the ground in Lamwo terrifying stories of violence and abuse against civilians. Many have witnessed their loved ones shot dead or slaughtered like animals," UNHCR spokesman Rocco Nuri told AFP.

"Families fled in all directions. Those unable to run were reportedly shot dead, including the elderly and people with disabilities."

A local pastor who fled Pajok on Wednesday, and asked not to be named, told AFP soldiers had entered the town in tanks "and suddenly we saw shooting and we just had to run."

Both he and regional Anglican Bishop Bernard Oringa reported that some 135 people had been killed, however this could not be independently verified.

The UN peacekeeping mission UNMISS said in a statement on Wednesday that they had twice been prevented from accessing Pajok since the fighting broke out.

"The mission has received reports of fighting between SPLA (government) troops and the opposition there and is trying to follow-up on reports of civilians killed in the area," the statement added.

"As you know Pajok has been in the hands of the rebels so what happened was government forces went there and fighting ensued and so the civilian population that has been staying with the rebels had to run away," he said.

"I don't know the figure (of those killed or injured) but in any fighting there must be casualties."

Uganda currently hosts more than 832,000 refugees from South Sudan, including over 270,000 in the Bidibidi refugee camp which in eight months has gone from an empty patch of land to the world's biggest refugee camp.

South Sudan's leaders fought for decades for independence, but once they got it in 2011, the fighting turned inward and civil war erupted in 2013 out of a power struggle between President Salva Kiir and his former deputy Riek Machar.

Brutal violence has forced over 1.7 million to flee the country and another 1.9 million are internally displaced.

The war has also created a man-made famine, exacerbating the dire humanitarian crisis.

Sudan reports 1,500 fleeing into the country every day, while over 2,000 arrive every day in Uganda.

According to the UNHCR monthly arrivals into Ethiopia's Gambella region tripled between February and March to over 16,000, with most fleeing fighting in the Upper Nile and Jonglei states.