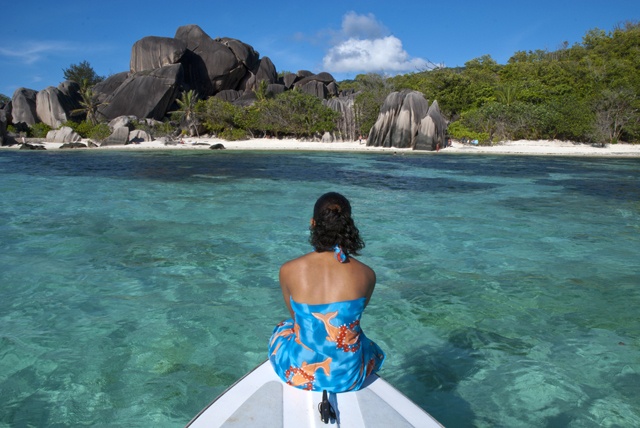 Anse Source d’Argent on La Digue is famous among tourists and locals for its giant boulders, calm turquoise waters and pearl-white sand.(Gerard Larose, Seychelles Tourism Board)

(Seychelles News Agency) - Anse Source d’Argent, one of Seychelles' iconic beaches, has made the cover of one of the world’s top geographic and travel magazines.

The beach is featured in an article titled ‘Sun, sand, sizzle’ in the February/March 2017 edition of National Geographic Traveler. The article details the world's best beaches.

The beach of the 115-island archipelago in the western Indian Ocean shares the subtitle of ‘Geologic Wonders’ with Playa del Amor of the Marietas Islands, Mexico and Cathedrals Beach from Ribadeo, Spain. National Geographic Traveler describes them as “where rocks, sands and water combine to amaze.”

“This Indian Ocean beach seems created by a Hollywood set designer. It’s no wonder that it is often ranked as the most photographed beach in the world,” wrote Kimberley Lovato, the author of the article.

Situated in the southwest corner of La Digue, Anse Source d’Argent is often described by visitors as a slice of heaven, with mini-beaches hidden by big granite boulders. The beach's calm, crystal blue water is protected by a reef.

The beach continuously makes the top 10 list of the world’s most beautiful beaches.

“This kind of exposure helps Seychelles in providing a greater awareness of the destination as a unique holiday place to potential travelers from the United States and other parts of North America,” he said in the press release.