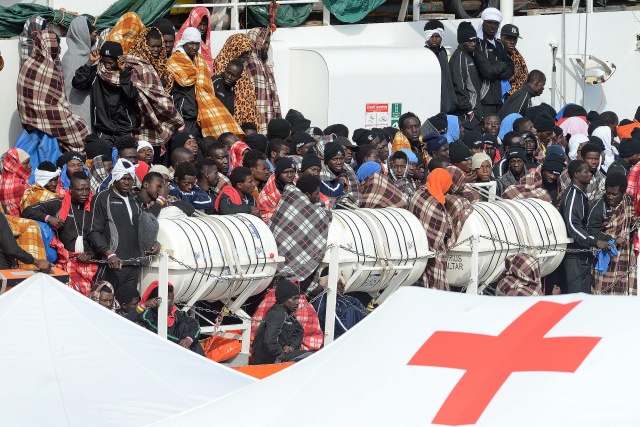 Would be immigrants wait to disembark in the port of Catania, on the island of Sicily on March 21, 2017 from the ship "Aquarius" following a rescue operation in the Mediterranean sea, where some 946 would be immigrants have been rescued. The Aquarius, a humanitarian ship run by the NGO SOS Mediterranean and Doctors Without Borders (MSF), said it saved 946 people, including 200 unaccompanied minors rescued after being found drifting on nine wooden and rubber boats. (Giovanni Isolino / AFP)

(AFP) - The Italian coastguard and other boats rescued some 3,000 migrants from unseaworthy boats off the Libyan coast on Saturday, as the good weather pushes the numbers up, a participating NGO said.

In all 35 rescue operations were launched during the day, with 15 of them still underway as night fell, the coastguard said.

German NGO Jugend Rettet, which took part in the rescue operations on Saturday, said 3,000 people had been plucked to safety during a particularly busy day due to the fine Spring weather in the Mediterranean.

Jugend Rettet spokeswoman Pauline Schmidt told AFP that a further 1,000 people remained to be rescued from inflatable dinghies and other craft, with the rescue ships reaching capacity.

Other, mainly non-governmental, boats were expected to arrive in the area to help the rescue operations, she said. "We have never had to deal with so many people at the same time."

On Friday rescue vessels worked flat out to rescue over 2,000 people from flimsy dinghies.

The Italian coast guard and five privately-run rescue boats plucked migrants from 16 overcrowded dinghies and three wooden vessels packed with people hoping to make a new life for themselves in Europe.

EU's border control agency Frontex has accused donor-funded vessels of doing more harm than good by sailing off Libya and acting "like taxis", and Italian prosecutors have suggested they may have links with traffickers -- a charge they have fiercely denied.

Distressing images of African migrants being plucked from heaving seas or the coffin-strewn aftermath of major sinkings have become a regular feature of television news bulletins since the crisis began spiralling out of control four years ago.

So far this year 666 people have been logged as dead or missing off the Libyan coast.

However that figure is well down on the death rate seen last year when more than 5,000 people perished, according to the International Organization of Migration