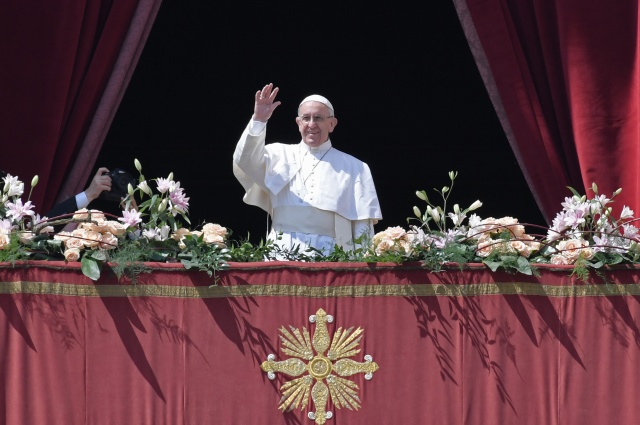 Pope Francis waves to the crowd before the "Urbi et Orbi" blessing for Rome and the world from the central loggia of St Peters' basilica following the Easter Sunday mass on April 16, 2017 at St Peter's square in Vatican. (Tiziana FABI / AFP)

(AFP) - Pope Francis urged an end to "horror and death" in Syria and implored God to bring peace to the Middle East as he delivered the traditional Easter Day mass in Rome on Sunday.

The Easter mass, the highlight of the Christian calendar began under a cloudy sky where worshippers had gathered since the early hours to gain access amid tight security.

After a short bout of heavy rain, the pontiff gave his traditional Urbi et Orbi blessing, to the city and the world, in which he prayed for those suffering from war, famine and political unrest, highlighting Syria, but also Ukraine and conflict zones in Africa.

He expressed hope that Jesus' own sacrifice might "sustain the efforts of all those actively engaged in bringing comfort and relief to the civil population in Syria, prey to a war that continues to sow horror and death."

And he prayed for peace "beginning with the Holy Land, as well as in Iraq and Yemen."

He also spoke out against the hostilities and famine in Africa, notably in South Sudan, Sudan, Somalia and the Democratic Republic of Congo "who endure continuing hostilities, aggravated by the grave famine affecting" parts of Africa.

He further urged world leaders to hear the message of peace as they contend with "the complex and often dramatic situations of today’s world," and to work "to prevent the spread of conflicts and to put a halt to the arms trade."

Without mentioning Venezuela by name, Pope Francis also alluded to political and social tensions in Latin America, expressing the hope that the "common good of societies" would prevail.

"May it be possible for bridges of dialogue to be built, by continuing to fight the scourge of corruption and to seek viable and peaceful solutions to disputes, for progress and the strengthening of democratic institutions in complete respect for the rule of law," he said.

Turning his attention to eastern Europe, he asked that "the Good Shepherd come to the aid of Ukraine, still beset by conflict and bloodshed."

Of the social and political upheaval in Europe, Francis prayed for God's blessing on "those experiencing moments of crisis and difficulty, especially due to high unemployment, particularly among young people."

The mass followed his Good Friday prayer in which he deplored the suffering of migrants, the victims of racism and the persecution of Christians around the world.

Easter week got off to a bloody start last Sunday when 45 people were killed in attacks on two Coptic churches in Egypt which were claimed by the Islamic State group.

The entire area around St Peter's Basilica was blocked off, with only several access points for those admitted after having their bags inspected.

Access to St Peter's Square itself was only possible after security checks similar to those at airports. Hundreds of police and security forces stood guard.

Sunday also saw Francis' retired predecessor Pope Benedict XVI turn 90, marked by a quiet celebration at the restored convent where he lives within the Vatican grounds.

"There will doubtless be something on the menu to mark his birthday," former Vatican spokesman Father Federico Lombardi told reporters last week.

Benedict's brother will join a small group of old friends on Monday for a birthday party at which they will celebrate with a few "Bavarian songs," Benedict's personal secretary Georg Gaenswein told Italian media.

"He will see his brother Georg, which will be the best present for him," he said.

To mark the occasion, the Vatican stamp and coin office has released a series of stamps marking important events in the two millennia history of the church.

Benedict stepped down in 2013 citing his increased frailty. He was the first pontiff to do so in 600 years.

Pope calls for 'urgent' response to climate crisis at COP26