WHO hails major gains against once 'neglected' diseases 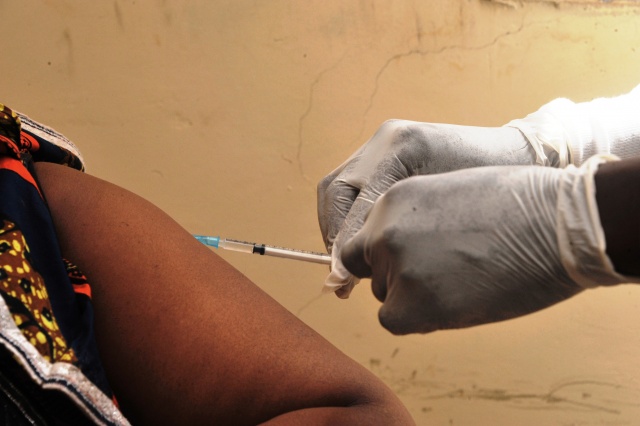 A woman gets vaccinated on March 10, 2015 at a health center in Conakry during the first clinical trials of the VSV-EBOV vaccine against the Ebola virus. The World Health Organization (WHO) said on March 5 that clinical trials launched on March 7 in Guinea marked the last step before the vaccine is available on the market. (AFP PHOTO / CELLOU BINANI)

(AFP) - The World Health Organization on Wednesday hailed "unprecedented progress" in the fight against 18 neglected tropical diseases -- including dengue fever and sleeping sickness -- which kill 170,000 people and disable millions each year.

The UN's health agency, pharmaceutical companies and civil society groups led by the Bill and Melinda Gates Foundation have been waging a protracted effort to eradicate the group of highly treatable diseases, which had previously received scant attention and resources.

"It's really a story of wonderful progress," the billionaire Microsoft founder Bill Gates said in Geneva. "A lot of pieces have come together."

His comments came as WHO launched its latest report on the battle against so-called NTDs.

"Over the past 10 years, millions of people have been rescued from disability and poverty, thanks to one of the most effective global partnerships in modern public health," WHO chief Margaret Chan said in a statement.

A full 1.6 billion people remain affected by NTDs -- more than 500 million of them children -- but that number is down from more than two billion in 2010, WHO said.

The effort against the group of diseases intensified in 2012, when governments and drug companies signed the London Declaration pact committing resources to help eliminate the most common NTDs.

Companies have since annually donated hundreds of millions of treatment doses, enabling one billion people to get therapy for at least one disease in 2015 alone.

Before the deal, "we really weren't organised as a global community to solve the problem", Gates told reporters, describing the accord's five-year anniversary as "a milestone in global health".

Great strides have been made to rein in some of the worst ailments, including Dracunculiasis, a crippling parasitic condition caused by the flesh-burrowing guinea worm.

In its bid to exit the body, the worms, which can be up to a metre long, dig their way out of the body, including through the eyes and genitals.

Last year, only 25 human cases of guinea worm were recorded, down from nearly 900,000 in 1989, when it was endemic in 21 countries, "putting eradication within reach", WHO said.

There has also been a huge reduction in human African trypanosomiasis, commonly known as sleeping sickness, which is transmitted by the tsetse fly.

The initial stage of the disease is symptom free, but during the second stage the parasites cross into the central nervous system and the brain, where they can be lethal if untreated.

While much has been done in the battle against NTDs, WHO cautioned that progress would stagnate without efforts to address broader poverty-related issues.

General » Be a reporter: Write and send your article » Subscribe for news alert
Tags: health, disease, research, WHO