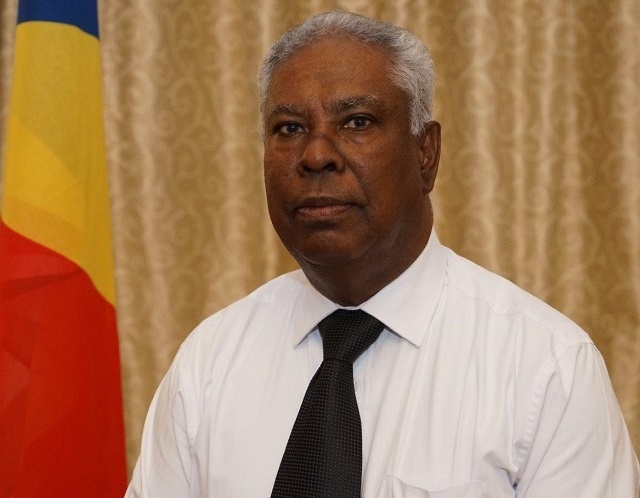 The new chief executive for the NDEA (State House)

(Seychelles News Agency) - The National Drugs Enforcement Agency, NDEA, was set up in 2008 to counter the threat of illegal drugs coming into Seychelles. A number of criticisms have been thrown at the agency by the public throughout the years, ranging from allegations of corruption to malpractice.

SNA caught up with the new head of the NDEA, Kishnan Labonte, to talk about his plans for the organization. Mr. Labonte was appointed chief of the agency in February by President Danny Faure, replacing Irishman Niall Scully.

SNA: As a former magistrate and now the CEO of the National Drug Agency, how would you describe the transition?

KL: Challenging. I have had extensive experience in law enforcement so the transition in itself was not a difficult one, but it was and it still is a very challenging one. This is because during the time that I was a magistrate, I was not undertaking any law enforcement duties but was rather acting like a referee: looking at both sides, the prosecution as well as the defence.

SNA: How do you feel as the first Seychellois to hold this position?

KL: It was with humility that I accepted this position and I hope that I will be able to make a change before I retire. But I have to say I was very happy in my position as a magistrate.

SNA: Do you feel that during the time that it has been in existence, the NDEA has been able to achieve most of its objectives?

KL: It would be difficult to say. The mandate of the NDEA is an on-going fight which the agency by itself will not win. We need help from everyone in society as well as partners from other countries in the region and beyond. International co-operation is vital as drugs does not come from the region. It comes mostly from Afghanistan.

SNA: What are your plans for the agency, especially since there are so many allegations of malpractice and corruption amongst its officers?

KL: I am not aware if there were any corruption in the past but I have iterated to my employees that I receive my guidance from the constitution. I have one philosophy which is to do no wrong and to fear no man but God.

I am also putting a lot of emphasis on training. I have a designated a deputy who will be in charge solely of investigation.

SNA: How do you respond to allegations that the NDEA targets only small time drug dealers and victims of drug abuse instead of going after the “big fish”, in other words the large importers with huge amounts of resources?

KL: To bring someone to court, you need evidence. It is not simply a matter of saying X is involved in drug-related operations because of common knowledge. The court does not rely on presumption and inference: it relies on evidence which takes time to amass. You need intensive surveillance and you need to be able to connect the person with the drugs.

It may be that the “big fish” as you say, is the financial backer and does not physically handle the drugs. In these situations, I aim to use the “back door”, meaning target and investigate assets. Which is why I wish to re-arrange the investigation team. It is much easier this way as when an asset is seized, the onus is on the defendant to prove where these assets come from.

It is this reversal of civil burden of proof which makes it easier. But in order to do that, you need intelligence and extensive investigation. It is not as simple as saying a person has two cars and we go and seize them.

SNA: Does that mean you will be working closely with the Financial Intelligence Unit?

KL:We have collaborated with FIU in the past, but I have not yet made all the changes that I wish to see within the agency.

SNA: Do you believe that the NDEA, under your guidance, will be able to fully tackle the drug problem in Seychelles?

KL: By myself I will never be able to solve this issue. The new department under Secretary of state Patrick Herminie which is responsible for drug abuse and rehabilitation comes in handy as it can aid in reducing demand by sending the drug abusers to rehab. On our side, we can focus on the traffickers. We have to deal with abusers by cutting the demand. If we only tackle on side of it, which is the supply, the abusers will find a way to get their drugs. But if we tackle the demand, there will be no profit to be made for the traffickers.

SNA: How would you rate the level of training of NDEA officers? What training do they take part in before they go on the field?

KL:In principle I have not seen any training manual for NDEA agents. I have directed my deputy Ted Barbe to design one for our agents. We are also looking towards incorporating the training with the police force. In the past, there had been instances where agents have shown a lack of etiquette.

We have not started official training as since I have come into office I have been establishing contacts and friendly ties with other countries such as Kenya and Mauritius. It is vital that such contacts are made so that we can communicate on a friendly level. My deputy Romano Songor has also been to Tanzania and has spoken with representatives from Madagascar.

SNA: What incentive does the NDEA offer its workers in order to deter them from succumbing to bribery?

KL:When I started, the Department of Public Administration (DPA) was reviewing the structure and scheme of workers at the NDEA. I also wrote a letter to them around three weeks ago. Right now, we are doing an audit on the entire organization as I want the NDEA to have a clean slate.

The Interview » Be a reporter: Write and send your article » Subscribe for news alert
Tags: National Drugs Enforcement Agency