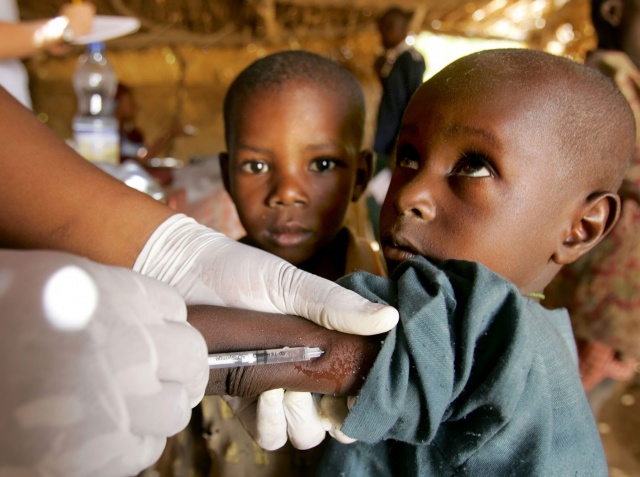 Children are vaccinated against meningitis in Tchadoua near Maradi in South west Niger. Over 8,000 suspected cases of the disease have been reported across Nigeria over the past five months, some 93 percent of which occurred in five northern states, according to a statement. (AFP PHOTO ISSOUF SANOGO)

(AFP) - A meningitis outbreak in Nigeria has killed 745 people, an increase of more than 50 percent in barely a week, officials said Wednesday, sounding the alarm over the feared epidemic.

"We need all hands on deck," said Chikwe Ihekweazu, head of the Nigeria Centre for Disease Control (NCDC) as the federal government announced the latest toll from the outbreak, which has mostly affected children.

The flare-up of Cerebrospinal Meningitis (CSM) serotype C cases is concentrated in northern Nigeria, where authorities convened a meeting of governors and traditional leaders from all states in the region, said a government statement.

"State governors reaffirmed their commitment to immediate and concrete actions towards halting the outbreak," said the statement after the meeting, held in collaboration with the federal health ministry and national agencies.

Over 8,000 suspected cases of the disease have been reported across the country over the past five months, some 93 percent of which occurred in five northern states, a statement said. The new death toll was a rise of 52 percent on last week's total of 489 dead.

Meningitis is caused by different types of bacteria, six of which can cause epidemics.

It is transmitted between people through coughs and sneezes and facilitated by cramped living conditions and close contact.

The illness causes acute inflammation of the outer layers of the brain and spinal cord, with the most common symptoms being fever, headache and neck stiffness.

Nigeria lies in the so-called "meningitis belt" of sub-Saharan Africa, stretching from Senegal in the west to Ethiopia in the east, where outbreaks of the disease are a regular occurrence.

The federal government said raising awareness of the disease among ordinary people was crucial.

"The traditional leaders also committed to continued awareness-raising in their communities and jurisdictions," it said.

"At national level and in affected states, activities aimed at driving information into grassroots .. continue," it said.

Action to counter the outbreak is being coordinated by the CSM National Emergency Operations Centre at the NCDC, and involves rapid response teams across the region.

"We are grateful to all rapid response team members, including government agency and partner staff who have remained at their different field posts, through the Easter period working on this outbreak response and control," said incident manager John Oladejo.