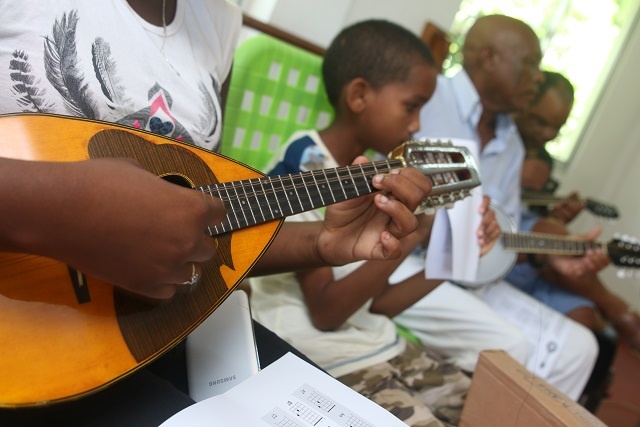 Young people and others are now getting the chance to learn about the origin of the mandolin, the different types of the instrument and how to play it. (Joe Laurence, Seychelles News Agency)

(Seychelles News Agency) - The resounding music of the mandolin can be heard at the Conservatory of Performing Arts as the  institute intensifies its efforts to revive some of the island nation's nearly extinct musical instruments.

The Seychelles Conservatory of Performing Arts based at Mont Fleuri, a central district of the main island, Mahe, has developed a music programme that centres on traditional music.

Jerry Souris, who is responsible for the programme, says that it is unfortunate that children and young people are not interested in playing instruments like the mandolin, zez, bonm, and makalapo, which are slowly losing popularity and are on the verge of becoming forgotten.

These musical instruments, which have been part of the traditional Seychellois Creole life, play a major role in the history of Seychelles.

You will be surprised to know that kids nowadays do not want to play the instrument such as the violin, which they say is an old person’s thing, yet the violin is widely used in both traditional and contemporary music,” said Souris.

He credited the late Patrick Prosper as the brainchild of the programme. Prosper was described as the defender of folklore and traditional music of Seychelles, an archipelago in the western Indian Ocean.

Souris said the conservatory is getting the assistance of John Wirtz -- another well known Seychellois singer and musician -- who is teaching traditional music.

“While students who take lessons at the conservatory still prefer the piano and guitar, we are doing our utmost to ensure that traditional music is still learned, played and enjoyed as we promote all traditional instruments.”

In the conservatory’s first activity for this year, the mandolin -- a small, short-necked lute with eight strings -- took centre stage. People taking part got the chance to learn about the origin of the mandolin, the different types of the instrument and how to play it.

The conservatory also hosts an annual event during the Creole festival entitled ‘Kreolisimo’ -- a fusion of Creole songs and music where traditional instruments are highlighted.