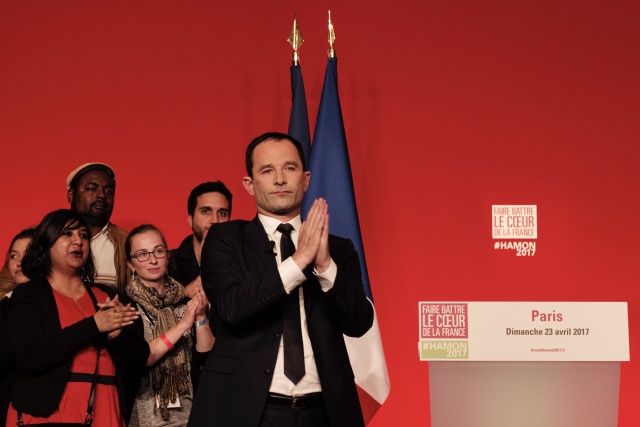 French presidential election candidate for the left-wing French Socialist (PS) party Benoit Hamon reacts after delivering a speech at the Maison de la Mutualite in Paris, on April 23, 2017, after the first round of the Presidential election. (Philippe LOPEZ / AFP)

(AFP) - A "drubbing" suffered by the Socialist candidate in France's presidential election on Sunday dealt a devastating blow to the century-old party, analysts said.

Benoit Hamon, 49, who took up the Socialist mantle after the deeply unpopular Francois Hollande decided against seeking re-election, crashed out in fifth place in Sunday's first round of the two-stage vote, according to projections.

It was the first time the Socialists have lost in the first round since 2002, when Lionel Jospin fell at the first hurdle behind then far-right leader Jean-Marie Le Pen.

And it is the first time in modern history that neither of France's mainstream parties have made it past the first round of a presidential election.

"Symbolically, the fact that the Socialist Party (PS) is not in the top three and not even the leading leftist party is a disaster," said political scientist Remi Lefebvre of the northern city of Lille.

Scoring just 6.2 percent according to the projections, Hamon fared worse than Communist-backed Jean-Luc Melenchon, who was set to finish fourth behind scandal-scarred conservative candidate Francois Fillon.

Hamon tried to put a brave face on what he admitted was a "historic drubbing" on Sunday.

"The left is not dead," he said. "The fight continues... with the parliamentary elections."

After the second round of the presidential election, French voters return to the polls to elect a new parliament on June 11 and June 18.

PS chief Jean-Christophe Cambadelis said Friday that the party will be fielding candidates in all 577 of France's parliamentary districts, adding: "The party still has good days in front of it."

Hamon proved unable to sustain the magic that won him the Socialist primary in January, ahead of former prime minister Manuel Valls, with proposals such as a universal basic income.

Key Socialist stalwarts deserted him, led by Valls, who last month threw his weight behind Emmanuel Macron, the centrist former Socialist who came out on top in Sunday's vote.

Hamon's poll numbers went into a steady slide from a high of around 17 percent as the charismatic Melenchon steadfastly refused to join forces and Macron also siphoned off support.

Melenchon, who enjoyed a late surge in the race after strong debate performances, scored 19 to 20 percent on Sunday.

"Melenchon's political goal, which was to beat the PS, was unimaginable just a few years ago," Lefebvre said.

The party founded in 1905, which first came to power in 1981 with Francois Mitterrand, fell from a great height since Hollande's 2012 victory brought the left back to power after three rightwing presidencies in a row.

Then, the Socialists were riding high, with a huge majority of France's regions and even a majority in the Senate for the first time.

Five years on, after Hollande failed to turn around a moribund economy and the country suffered a string of terror attacks, the PS heads just five of France's 13 regions, and 26 of its 101 departments.

The worst defeat was to come in 2014 when the PS lost municipal elections in more than 150 cities of at least 9,000 inhabitants.

As this year's campaign wore on, party infighting turned into open warfare between diehard leftists and the more centrist, economically liberal wing represented by Valls.

The party failed to find a "third way... between social liberalism and the radical left," said Thibaut Rioufreyt, a political scientist based in the central city of Lyon.

"They broadly abandoned the intellectual work."

The PS joins the ranks of other social-democratic forces in Europe that have recently suffered deep losses, such as in Greece, Austria, Spain, Ireland and the Netherlands.

"The problem with social democracy is that it does not have the answers to new changes in modern society such as globalisation, the digital revolution and the ecological transition," Rioufreyt said.

But the June parliamentary elections hold out some hope for France's Socialists, Lefebvre said.

"Political parties don't disappear just like that. The PS has been around for 100 years, (with) an organisational structure, elected officials, activists, a tradition and a memory."