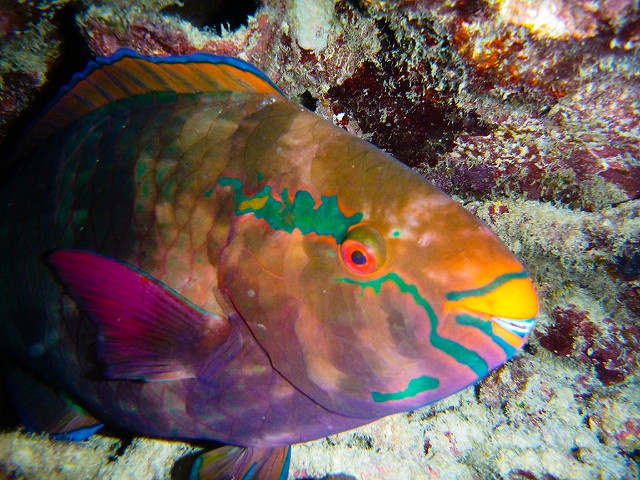 SIF have revealed the first signs of coral recovery in the far-flung Aldabra atoll. Parrotfish could help the archipelago’s coral reefs to recover from bleaching more quickly. (Dean Croshere/flickr) Photo License: CC BY 2.0

(Seychelles News Agency) - The results of a marine survey undertaken by the Seychelles Islands Foundation (SIF) have revealed the first signs of coral recovery in the far-flung Aldabra atoll. The foundation also indicated that greater protection of herbivorous fish such as the parrotfish could help the archipelago’s coral reefs to recover from bleaching more quickly.

Coral reefs around the world suffered widespread bleaching during the global 2015-2016 El Niño weather phenomenon, which causes higher ocean temperatures and acidification. Although Australia’s Great Barrier Reef has garnered the most headlines, with scientists recently announcing that the world’s largest living structure was at a ‘terminal stage’, the Seychelles islands have been similarly affected.

Corals in some of the reefs around the Indian Ocean archipelago have suffered losses of up to 97 percent of live corals, leading local marine biologists and conservation experts to worry for the future of the reefs surrounding the inner granitic islands.

However, the remote atoll of Aldabra, situated to the far west of the Seychelles archipelago of 115 islands, is one of the most biologically diverse raised coral atolls in the world. Protected as a nature reserve and awarded UNESCO World Heritage Site status in 1982, the SIF - a public trust established by the government - protects and manages the area.

The Aldabra research team carried out coral recruitment surveys and baited remote underwater video (BRUV) surveys in addition to their core monitoring work at the end of 2016. The data analysed so far has revealed that despite higher ocean temperatures killing off almost 50 percent of all hard corals and a more severe loss of soft corals, SIF’s surveyors found clear signs that the corals in the region were already beginning to recover.

According to the SIF, Aldabra’s reef resilience can be put down to two factors: firstly, sea temperatures in the area have not reached dangerous levels this year, allowing the corals a welcome reprieve from temperature stress. Secondly, Aldabra boasts an abundance of herbivorous fish such as parrot and surgeon fish - unlike the inner islands. These vitally important species graze extensively on aggressive green algae that can smother dying reefs, and less algae means more space for corals to re-colonise.

The SIF’s communications officer Lynsey Rimbault told SNA that unlike the inhabited granitic islands of the Seychelles, Aldabra’s reefs do not suffer from local man-made impacts.

“With only a small community living on Aldabra for the monitoring activities and its protection, coral reefs can thrive without being impacted by pollution, fishing and tourism,” she explained. “Without these local stressors, corals are more resilient, can withstand higher water temperatures for longer and may recover faster.”

“In addition, the fish community of Aldabra hosts many herbivores in high numbers and large sizes. In phases of disturbance algae can establish on a reef, [and] herbivores have the potential to keep the algae growth in check, thereby promoting coral recovery.”

Rimbault agrees that it might be wise for the government to look at protecting these particular species from artisanal fisheries in times of stress for the reef. Parrotfish and rabbitfish are two such herbivores often found on the dinner plates of tourists and locals alike in Seychelles.

Some species of parrotfish also eat a wide variety of microscopic reef organisms, and their feeding activity is regarded by marine biologists as vital for the production and distribution of coral sands in the reef ecosystem.

“As well as being worth protecting in their own right, herbivores play a very important role in coral ecosystems. Many factors can impact the health of coral; protecting the herbivores that keep these ecosystems functioning is a tangible way to support resilient coral communities that are better able to cope with other impacts,” she said.

Rimbault warns that protecting these herbivorous fish is only part of the solution, as global climate change will no doubt mean that bleaching events will happen more often.

“The best strategy for preserving coral reefs in the world’s oceans includes promoting sustainable fishing and tourism, and reducing our contribution to climate change,” she said.