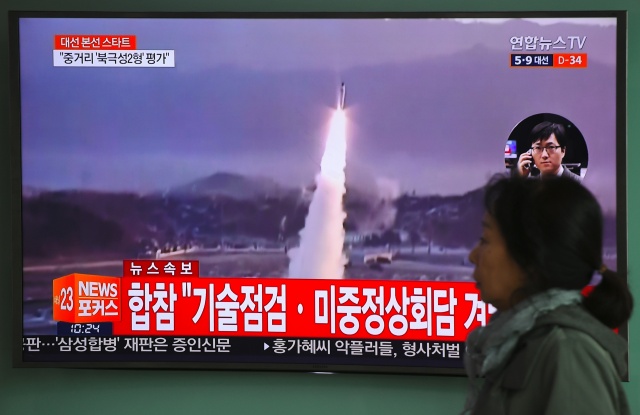 A woman walks past a television screen showing file footage of a North Korean missile launch, at a railway station in Seoul on April 5, 2017. Nuclear-armed North Korea fired a ballistic missile into the Sea of Japan on April 5, just ahead of a highly-anticipated China-US summit at which Pyongyang’s accelerating atomic weapons programme is set to top the agenda. (JUNG Yeon-Je / AFP)

(AFP) - The UN Security Council must be ready to impose tougher sanctions on North Korea over its nuclear and missile programs, US President Donald Trump said Monday, calling the status quo "unacceptable."

The comments are sure to ratchet up tensions again as North Korea pushes ahead with its ballistic missile program.

It is also believed to be preparing a sixth nuclear weapons test and recently detained a US citizen, the third held in the country.

"This is a real threat to the world," Trump said while hosting United Nations Security Council ambassadors at the White House. "North Korea is a big world problem. And it's a problem we have to finally solve."

"The council must be prepared to impose additional and stronger sanctions on the North Korean nuclear and ballistic missile programs," he added.

The United States has ordered an aircraft carrier strike group to the western Pacific near North Korea. The group is due to arrive by the end of April.

The Pentagon said its leaders and other top officials will give a classified briefing on North Korea to US senators on Wednesday at the White House, rather than in the usual secure rooms at the Capitol.

Meanwhile, US Vice President Mike Pence is heading back to Washington after visits to Asia and Australia, where North Korea headlined talks.

Trump has intimated that he is willing to ramp up US military pressure on North Korea while simultaneously encouraging China to use its influence on its ally and reject bilateral diplomacy with Pyongyang.

"People have put blindfolds on for decades and now it's time to solve the problem," he said.

The US leader spoke about North Korea in telephone conversations with Chinese President Xi Jinping on Sunday and German Chancellor Angela Merkel on Monday, the White House said in a statement.

In the call with Xi, "the two leaders reaffirmed the urgency of the threat posed by North Korea's missile and nuclear programs, and committed to strengthen coordination in achieving the denuclearization of the Korean Peninsula," it added.

Xi urged "restraint" on North Korea in the call, according to the Chinese foreign ministry.

After a compromise with Russia, the UN Security Council last Thursday unanimously and strongly condemned North Korea's latest missile test and demanded it conduct no more. The text, drafted by the United States, specifically mentioned the threat of more sanctions.

Pyongyang is seeking to develop a long-range missile capable of hitting the US mainland with a nuclear warhead, and has so far staged five nuclear tests, two of them last year.

Nikki Haley, the US ambassador to the United Nations, on Monday called the latest detention of the US citizen by North Korea a display of muscle-flexing by the country's "flailing" leader Kim Jong-Un.

Kim Sang-Duk, or Tony Kim, was arrested Saturday at Pyongyang's airport as he was about to leave the country after a teaching stint at a university founded by evangelical Christians.

"We have said, for quite a while now, that the United States is not looking for a fight," Haley told CBS television. "So North Korea doesn't need to give us a reason to have one. And I think that they're panicking right now."

General » Be a reporter: Write and send your article » Subscribe for news alert
Tags: NKorea, US, UN, sanction, politics