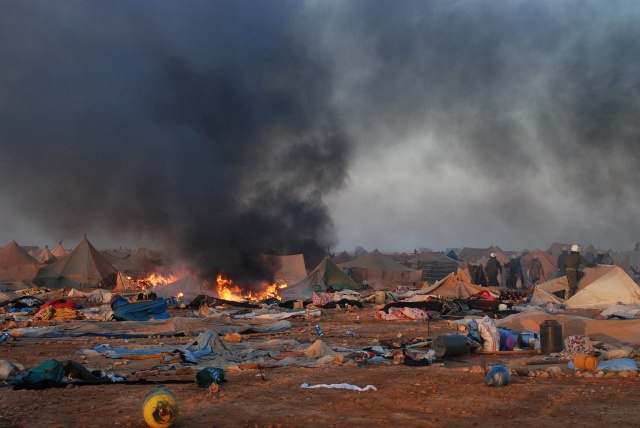 Moroccan forces dismantle a camp housing thousands of refugees in the Western Sahara, near Laayoune, on November 8, 2010 leaving four dead and scores injured, according to the rival sides. The security forces were ordered to empty a camp housing some 12,000 people set up four weeks ago outside Laayoune, the main town in the Western Sahara, in a protest against the deterioration of living standards. The Polisario Front rebel group strongly condemned the Moroccan raid as an attempt to derail the new UN-brokered attempt to end unrest in the sparsely populated territory on North Africa's Atlantic coast. (AFP PHOTO / MAP
MAP / AFP)

(AFP) - The UN Security Council is expected to vote Thursday on a draft resolution backing a UN bid to re-start talks on settling the decades-old Western Sahara conflict, diplomats said.

The draft resolution would also put pressure on the Polisario Front independence movement to immediately withdraw fighters from a tense buffer zone after Morocco pulled back its forces in February, according to the text seen by AFP.

The United States circulated the proposed resolution to the Security Council on Monday after consulting with France, Russia and Britain on the measure that would also extend the mandate of the UN peacekeeping mission in Western Sahara for a year.

UN Secretary General Antonio Guterres told the council in a report this month that he planned to re-start negotiations "with a new spirit" to try to end one of the world's most intractable conflicts.

"It is indeed time to look ahead and to re-launch negotiations, that is what we want," French Ambassador Francois Delattre told reporters as the council met Tuesday to discuss the draft text.

Morocco and the Polisario fought for control of Western Sahara from 1974 to 1991, with Rabat taking over the desert territory before a UN-brokered ceasefire in the former Spanish colony.

Rabat considers Western Sahara an integral part of Morocco and proposes autonomy for the resource-rich territory, but the Algerian-backed Polisario Front insists on a UN referendum on independence.

- Pressure on the Polisario -

Welcoming what he described as a "new momentum" for talks, Delattre said the issue of the Polisario's withdrawal from the Guerguerat post near the Mauritanian border had to be addressed first.

"There is one issue we need to solve and that is Guerguerat," he said.

Uruguay and Russia however said the draft resolution lacked balance.

"It's very unbalanced in the way it handles the Polisario," said Uruguay's Ambassador Elbio Rosselli, adding that the text failed to mention the broader context of "how we go to where we are".

Last month, long-serving UN envoy Christopher Ross resigned following tensions with Morocco, which accused him of bias in favor of the Polisario.

Former German president Horst Kohler has been tipped to replace him.

The draft resolution calls on Morocco and the Polisario Front to "resume negotiations" with a view to achieving a "just, lasting and mutually acceptable solution."

The council "affirms its full support for the commitment of the secretary-general and his personal envoy towards a solution to the question of Western Sahara," according to the draft.

The United Nations opened negotiations between Morocco and the Polisario Front in 2007 and there have been several rounds since, with the latest held outside of New York in 2012.

There has been little progress however over resolving the future status of Western Sahara.