US may stay in Paris climate accord, with caveats 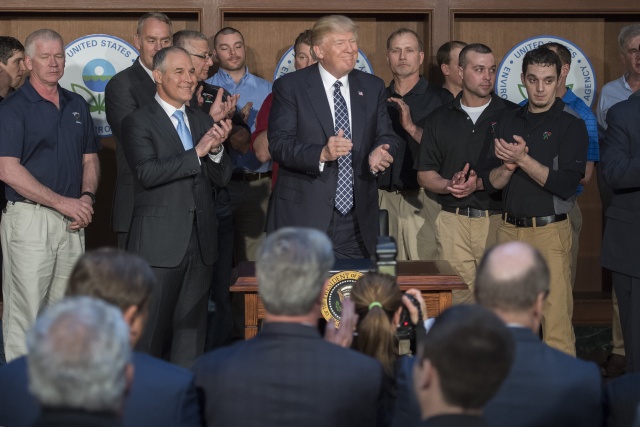 (AFP) - Signs are mounting that US President Donald Trump's administration may stay in the landmark Paris climate change accord of 2015, under pressure from big business and public support for the agreement.

But experts say the final decision, expected next month, is anything but certain, and staying at the table could come with significant caveats, like a weakening of US commitments to curbing greenhouse gas emissions.

"Given the unpredictability of decision-making by this administration, I am very reluctant to predict," said Elliot Diringer, executive vice president of the Center for Climate and Energy Solutions.

"But there does seem to be a growing convergence around a strategy of staying in the Paris Agreement but lowering the US target."

The latest word on the administration's stance came from Energy Secretary Rick Perry, who said Tuesday he would not advise Trump to abandon the deal but rather renegotiate it.

That statement aligned Perry, the former governor of Texas, with Secretary of State Rex Tillerson, who formerly headed ExxonMobil and has spoken in favor of honoring the US commitment to the Paris deal, struck in 2015 and signed by more than 190 countries.

Trump's daughter Ivanka, and son-in-law Jared Kushner -- who both serve as his advisors -- are also said to be in favor of the deal.

On Wednesday, 13 major international businesses ranging from energy to pharmaceuticals to retail urged Trump to adhere to the Paris accord.

"US business interests are best served by a stable and practical framework facilitating an effective and balanced global response," said the letter signed by BP, Walmart, Google and others.

"We believe the Paris Agreement provides such a framework."

Speaking at a TED conference Wednesday, former vice president turned environmental activist Al Gore said there is a "better than a 50-50 chance" Trump will honor the Paris deal.

"I certainly hope so, because that agreement sent a powerful message... and has already begun to accelerate the sustainability revolution."

But some in Trump's inner circle, including advisor Steve Bannon, want Trump to keep his campaign promise to "cancel" the deal.

Environmental Protection Agency administrator Scott Pruitt is also said to be pushing for a US exit, according to Andrew Light, senior fellow at the World Resources Institute, a global research organization.

"He is worried that if the US stays in Paris, that would become the basis for some kind of legal objection to his work now, to do things like dismantle the Clean Power Plan and regulations (former president Barack) Obama put in place on transportation and electricity sectors," Light told AFP.

"I don't think the US staying in Paris interferes at all with what Pruitt wants to do with regard to domestic regulations," he added.

"But if the US stays in Paris there is a very high likelihood they will also announce they intend to change the US target."

The United States agreed at the Paris talks to reduce its carbon dioxide emissions by 26-28 percent by 2025, compared to 2005 levels.

Under the agreement, signatories undertake to limit global warming to "well below" 3.6 degrees Fahrenheit (two degrees Celsius) over pre-industrial levels, and to strive for 1.5 C.

Light, a former US State Department climate official, said any US weakening of its target would violate the spirit of the accord.

"But given that there is no strong compliance regime it is not really clear, to me at least, what other countries could do to try to keep the US from going through with some kind of revision," he said.

The White House has said a decision will be announced before the G7 summit in Italy on May 26 and 27.

"It is unclear, really, what they are going to do," said Frank Maisano, co-founder of the strategic communications practice at Bracewell, an international law firm based in Houston.

"I think the sentiment is currently that they should stay in and for very good reasons, because we never had much success when we just pushed it to the side -- take our toys and go home," he told AFP.

General » Be a reporter: Write and send your article » Subscribe for news alert
Tags: environment, US, climate, politics, energy, coal