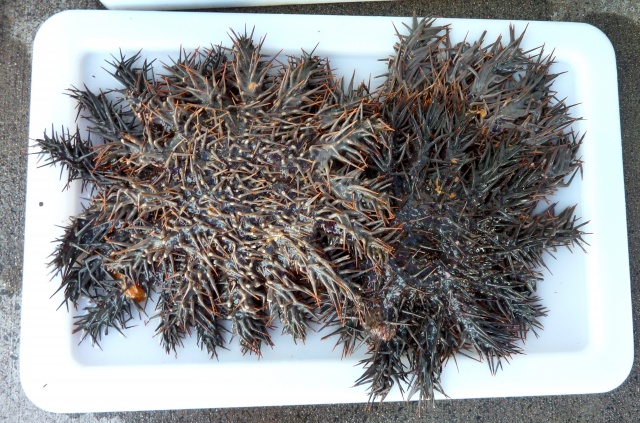 This photo taken on September 18, 2014 shows two native predatory coral-feeding crown of thorns starfish, which have risen to plague-like levels, in a container in Cairns after been removed from the Great Barrier Reef. To the world, the Great Barrier Reef is an international marine icon and vast underwater kingdom boosting some of the rarest animals and plants. (AFP PHOTO/Glenda KWEK)

The predatory starfish is naturally-occurring but has proliferated due to pollution and run-off at the World Heritage-listed ecosystem, which is also reeling from two consecutive years of mass coral bleaching.

Until now other expensive chemicals such as bile salts have been used to try and eradicate the pest -- which consumes coral faster than it can be regenerated -- but they can harm other marine organisms.

Study head Lisa Bostrom-Einarsson said crown-of-thorns were injected with vinegar at four sites on the reef over six weeks, causing them to die within 48 hours with no impact on other life.

"We recorded live coral cover, abundance of coral disease, fish abundance and diversity, fish diseases and the abundance of closely related invertebrates before, during and after the six-week study period and found no detrimental effects," she said.

Keeping crown-of-thorns under control however is a tough ask, with dive teams needing to individually inject each starfish before it dies and breaks-up.

But despite the labour-intensive job, it is far more efficient than extracting them from the water before killing them.

A major study of the reef's health published in 2012 showed cover had halved over the past 27 years and attributed 42 percent of the damage to crown-of-thorns starfish.

GBRMPA director of tourism and stewardship Fred Nucifora said the new method would be used to target reefs identified as having high conservation and tourism values.

"Culling crown-of-thorns starfish is a critical management activity to protect coral cover and boost reef resilience, particularly in the wake of coral bleaching," he said.

Earlier this month, scientists revealed the 2,300-kilometre (1,400-mile) long Barrier Reef was suffering its second consecutive mass bleaching event due to warming sea temperatures, and said some coral had "zero prospect" of recovery.

The reef contributes more than Aus$7.0 billion (US$5.2 billion) a year to Australia's economy, supporting the livelihoods of some 70,000 people, and there have been warnings that dying coral could cost the region more than a million tourists a year.

Bostrom-Einarsson said while the innovative new method was good news, it would be tough to wipe out starfish altogether.

"There are millions of starfish on the Great Barrier Reef and each female produces around 65 million eggs in a single breeding season," she said.

"It would take a massive effort to try and cull them all individually, but we know that sustained efforts can save individual reefs."

Vinegar has now been added to the GBRMPA's list of approved control chemicals, meaning operators can apply for permits to start controlling the starfish.