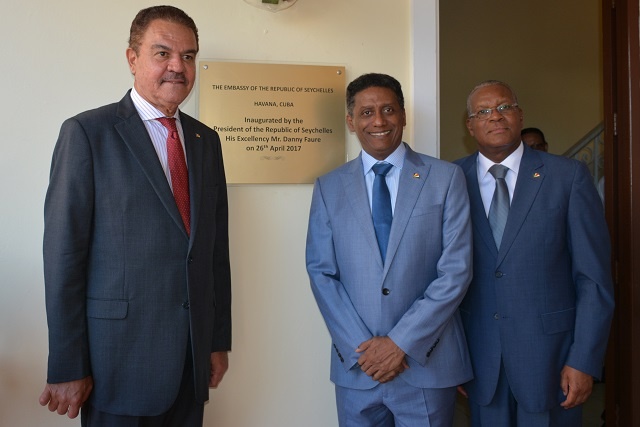 President Danny Faure with the Seychelles' Foreign Secretary Claude Morel and the Ambassador to be based in Cuba, Joseph Nourrice, following the unveiling of inauguration plaque (State House)

(Seychelles News Agency) - President Danny Faure opened the Seychelles' embassy in Havana, Cuba on Wednesday as part of his official visit to the Caribbean nation, a statement from State House said.

During the inaugural address, the Seychelles' Foreign Secretary, Claude Morel said, “The establishment of the embassy will serve to further facilitate the alignment of our two nations, as we proceed upon the path to a common destiny which sees our two peoples flourish and prosper.”

Morel added that: “Our Havana-based embassy will also serve as a bridge between Seychelles and the numerous island nations of the Caribbean region.”

Seychelles and Cuba established diplomatic relations on April 12, 1978, and have maintained close cooperation in health, education, and environment as well as in sports, cultural, economic and social spheres.

The embassy in Cuba is the Seychelles' first one in the Latin American and Caribbean region and will be headed by Ambassador Joseph Nourrice who was appointed by the island nation’s president in March.

During his visit, President Faure also met with some of the Seychellois students currently studying in Cuba. About 16 young people from Seychelles, an archipelago in the western Indian Ocean, are currently studying on the Caribbean island, where Faure graduated as a Bachelor in Political Science in 1985.

As part of the programme of activities, the Seychelles' head of state was expected to lay a wreath to honour Cuban national hero Jose Martí at the Memorial Monument in the Revolution Square in Havana.

Following his state visit, President Faure will take five days of his annual leave in Havana and is expected back in the office on May 8.