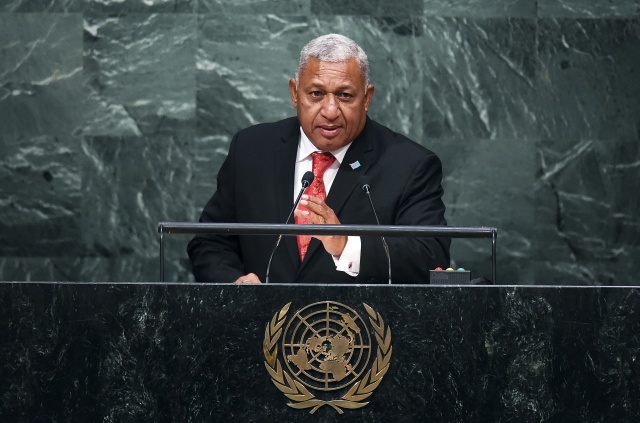 (AFP) - Fiji pleaded with US President Donald Trump not to abandon the Paris climate deal Wednesday, as the tiny Pacific nation prepares to lead the latest UN talks on reducing global emissions.

Prime Minister Voreqe Bainimarama said the world needed America's leadership "as we confront the greatest challenge of our age".

Climate sceptic Trump should honour his country's commitments under the Paris deal, said Bainimarama, who will serve as president of the UN's COP 23 talks in Bonn later this year.

"We can't have one of our best performers abandon the field of play... stay the course," the Pacific leader said in a statement issued by his office Wednesday.

"Listen to those around you who are encouraging you to do so. Don't let the whole team down by leaving when we have a clear game plan and have put so many scores on the board."

Bainimarama said the time for questioning the veracity of climate change had passed and the best scientific advice on the issue was clear.

"Man-made climate change is not a hoax, it is frighteningly real," he said.

Fiji is already dealing with the impact of climate change through wild storms such as last year's Cyclone Winston, he said, which killed 44 people and wiped out one-third of the country's economic production.

Climate change meant such extreme tempests could flare up "out of nowhere, at any time", he added.

"We are facing a situation in which a single event scoring a direct hit on Fiji could wipe out years of development and set us back for decades," he said.

Bainimarama said the top priority at COP 23 was "to build a grand coalition of governments, civil society and the private sector to defend and uphold the Paris Agreement".

While the November 6-17 talks will be held in Bonn, Germany has invited Fiji to act as president in order to give a voice to those on the frontline of climate change.

Bainimarama said Fiji could never have hosted such a large meeting, which is expected to attract 20,000 people.

"(It) is a selfless act of generosity on the part of the German government," he said.

Under the Paris agreement, signatories undertake to limit global warming to "well below" 3.6 degrees Fahrenheit (two degrees Celsius) over pre-industrial levels, and to strive for 1.5 C.

The United States agreed at the meeting to reduce its carbon dioxide emissions by 26-28 percent by 2025, compared to 2005 levels.

However Trump, who has described climate change as a "hoax", is under pressure from some in his administration to abandon the deal or significantly renegotiate it.

General » Be a reporter: Write and send your article » Subscribe for news alert
Tags: Fiji, US, Germany, UN, climate