Seychelles to share knowledge on ocean through new learning centre 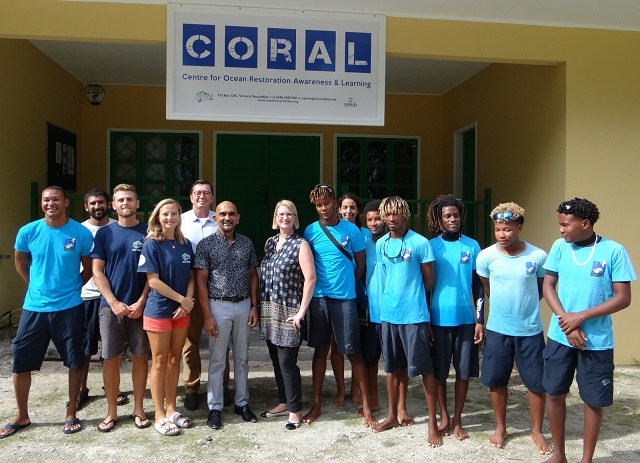 The aim of the centre is to bring together scientists and students from all over the world and share knowledge on how to make our oceans better, chief executive of Nature Seychelles Nirmal Shah, said. (Nature Seychelles)

(Seychelles News Agency) - A new centre for ocean restoration, awareness and learning (CORAL) has opened on Praslin, the second-most populated island of Seychelles.

“The aim of the centre is to bring together scientists and students from all over the world and share knowledge on how to make our oceans better,” said Nirmal Shah, the chief executive of Nature Seychelles, a not-for-profit organisation that will be responsible for the centre.

Shah said the centre will use information gathered over the past seven years on one of the largest coral restoration project ever implemented in the Cousin Island Special Reserve, located near Praslin.

Through the Reef Rescuers project, 32 species of corals were planted in a degraded area the size of a football field.

Following the El Niño incident in 2015, bleaching and mortality set back the successful trajectory of the project until a “super coral” was identified by the volunteers.

“The super coral could withstand the increase in temperature, and thus Nature Seychelles is seeking more funds to establish nurseries of this corals as well as monitor and maintain the designer reefs that we had built over the years,” added Shah.

The Reef Rescuers project which began in 2010 received funding from the United States Agency for International Development (USAID), and this has been extended to allow the centre’s operation until 2019.

The existing centre includes dormitories, offices as well as a meeting room and there is currently only two permanent staff. This will soon change when the centre starts its daily operations.

At the opening of the centre, Melanie Zimmerman, the US embassy’s charge d’affaires responsible for Mauritius and Seychelles, commended Nature Seychelles for its efforts in saving the ocean in the midst of climate change.

Zimmerman said the project should be a point of reference for the country and the whole world and will encourage students to join the programme being offered by the centre.