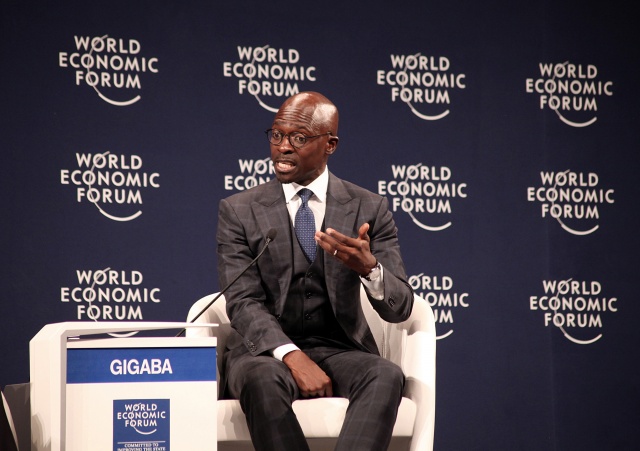 South African finance Minister Malusi Gigaba gives his remarks as part of panel discussion during the first day of the World Economic Forum on Africa at the Durban International Convention Centre on May 3, 2017 in Durban, South Africa. (STRINGER / AFP)

(AFP) - Africa's flagship business and political summit being held in Durban this week has been overshadowed by a bitter fight exposing deep divisions at the heart of South Africa's ruling ANC.

The African National Congress (ANC) was plunged into crisis when President Jacob Zuma dramatically fired respected finance minister Pravin Gordhan in a March cabinet reshuffle that saw the promotion of people who are perceived as Zuma loyalists.

Hundreds of African business leaders, politicians and experts were gathering in the Indian Ocean coast city of Durban for the continent's Davos when a high court judge ruled on Thursday that Zuma must justify his reshuffle.

The ruling followed an application by the opposition Democratic Alliance (DA) that he release documents related to the shake-up -- a significant blow to the president.

"Not long ago I had a reshuffle of government. I put in a lot of young people... and of course some people would have different views -- that's democracy," Zuma told an audience at the World Economic Forum on Africa which he is hosting and which will conclude on Friday.

Within days of the reshuffle, two of the world's major rating agencies -- Fitch and Standard & Poor's -- downgraded South African sovereign debt to junk status which caused the rand to tank.

"The president ought to have reasonably foreseen the dire consequences of this reshuffle," DA shadow minister James Selfe said in a statement ahead of the court judgement.

Several hundred demonstrators marched on the WEF meeting on Wednesday to protest Zuma's alleged corruption and to call for his resignation.

Also present at the summit was Gordhan's replacement Malusi Gigaba, who told journalists that he is "tired of answering that question" on whether Zuma could lose a parliamentary vote of no confidence over the reshuffle. Opposition parties are seeking a secret ballot of lawmakers which they believe could see Zuma ousted.

"The ANC holds 62 percent of the vote in the national assembly. There is no chance in hell that the vote of no confidence is going to succeed. There have been so many votes of no confidence since 2009 -- and none of them has been successful," said Gigaba.

"The government of South Africa remains intact and it's going to remain intact until 2019 when we hold the next general elections."

Gordhan, who has warned that the ruling ANC party could lose power in 2019, attended the WEF in a personal capacity but declined to comment when approached by AFP.

International businesses attending the summit of Africa's great-and-good have voiced concerns about the impact of the reshuffle and its aftermath.

"I am nervous due to the reshuffling and the surrounding developments," said Alexis von Hoensbroech, head of sales and products at German air freight giant Lufthansa Cargo. "Investors are not seeing the stability they want."

"There are some concerns given the environment," Ulrich Spiesshofer, chief executive of Swiss industrial giant ABB, told one WEF forum.

"It's the elephant in the room," said an international banking executive attending the meeting who spoke on condition of anonymity.

Despite their concerns, Signal Risk political analyst Ryan Cummings said that political tensions, though a distraction, would not affect South Africa's ability to stage events like the WEF.

"Political controversy in South Africa is not something new... It's never curtailed our ability to host large-scale events," he said.

Ahead of the WEF in Durban, South Africa's recently appointed deputy finance minister Sifiso Buthelezi said he hoped political tensions would not overshadow the gathering.

"We are faced by very, very pressing issues as a country, as the continent and the world. My hope is that it doesn't (get overshadowed)," he said.

At the Durban meeting, Zuma spoke for the first time about being booed at a Mayday rally organised by the powerful Cosatu trade union federation which is in a political alliance with the ANC -- highlighting the growing tide of opposition that he is facing.

"The problem is that people haven't understood what democracy is all about. Protests, booing and debate are part of the culture of a democracy. Unfortunately, people misunderstand and misread this," he said.

After being heckled by the large crowd of workers in the central city of Bloemfontein, Zuma was spirited away by his security detail, forcing the cancellation of the event.

A growing number of leading ANC figures have accused Zuma of being authoritarian and corrupt.

Several protest marches have drawn crowds of thousands onto South Africa's streets in recent weeks with opposition parties joined by ANC members dissatisfied by Zuma's performance and fearful of electoral prospects in the 2019 polls.

The party slipped to 55 percent of the vote in last year's local elections -- its worst-ever result.